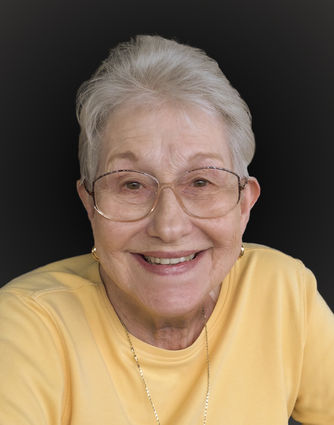 Jo Ann was born May 10, 1934, in Port Arthur, Texas to Lawrence J. and Pearl (Heard) Carter. She grew up in Pear Ridge, was a member of Trinity Baptist Church in Port Arthur where she played on the church softball and basketball teams and graduated from Thomas Jefferson High School.

Jo Ann married Earl Goodwin May 31, 1952. After starting their family Jo Ann went back to school and graduated from Lamar University in 1974. She worked as a Math teacher at West Orange Junior High and then transferred to Lamar University – Port Arthur, where she initiated their Mathematics Department and taught math there until her retirement.

Jo Ann was a member of First Baptist Church of Bridge City where she sang in the choir and served in the Sunday School program.

She was also a member of the Bridge City Chapter of the Eastern Star.

Jo Ann loved to cook and bake, especially for Earl.

She enjoyed working in the rose gardens she and Earl had at their home.

She also loved to read "thoughtless" novels, sewing clothes, working crossword puzzles with Earl, watching tennis and basketball, as well as all other sports, and playing dominos.

She and Earl served two summers with Volunteer Christian Builders in the Pacific Northwest building churches.

After Earl passed, she moved to Houston in 2008 to be closer to her family and became an active member of First Baptist Church of Cypress where she sang in the choir.

She was preceded in death by her husband, Benjamin Earl Goodwin, her parents, Lawrence and Pearl Carter, and her brother L.J. Carter Jr.

She is survived by her daughters Sheila and husband Bruce Humphreys of Arvada, CO; and Patricia and husband Donald Franklin of Houston, TX; grandchildren Alan Humphreys, Joanna and husband Christopher Juergens, Colleen Franklin and Cody Franklin; as well as many nieces and nephews.

There will be two services: A Memorial Service on Saturday, December 21 at 3:00 p.m. officiated by Dr. Joe Blair at First Baptist Church of Cypress, 14515 Cypress N Houston Rd, in Cypress. The Funeral Service will be in Bridge City at 2:00 p.m. Sunday, December 22, officiated by Reverend Dale Lee at Claybar Funeral Home in Bridge City, 800 Highland Ave. Interment will follow at Hillcrest Memorial Gardens in Orange.

A visitation will be held prior to the funeral service, beginning at 1:00 p.m., at Claybar Funeral Home in Bridge City.