Country cooking comes to Bridge City in the New Year 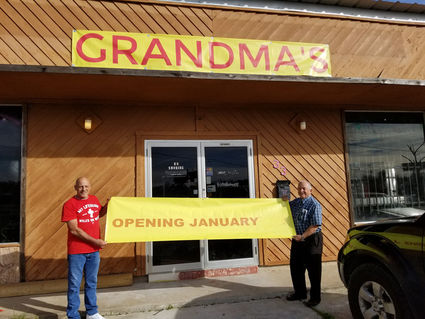 Photo: Grandma’s Restaurant at 33 Patillo Road in Bridge City was set to open Jan. 1, but they have pushed the opening back to Jan. 13. Pictured L to R is “BW” Pittman-manager and John R. Smith-owner. Grandma’s offers home cooking from family recipes and daily specials.

Grandma’s, a new restaurant that features home cooking from family recipes, will be opening Jan. 13 in Bridge City at 33 Patillo Road. The first Grandma’s opened in Port Arthur on 9th Avenue 19 months ago. Several Orange County residents have already discovered it and are excited about getting it in Bridge City.

Doug Wilson was in Wal-Mart Thursday talking about the opening. “I love Grandma’s,” he said. “I love to get that big catfish.”

“It’s the best thing I’ve had since the Boondocks,” said Wilson. He carries picture of it on his phone showing friends. “I’m spoiled to it. I can’t get nothing else.”

Besides catfish, they will be serving meatloaf, chicken fried steak, fried shrimp and more.

“We have the best fried shrimp from Maine to Spain,” bragged Chipman. “If they come here and eat the shrimp, they will never go to another restaurant.”

They have a set special each day, except Sunday. The specials come with two sides, bread and tea for $9.99.

“There is nobody that sells this kind of food but us in Orange or Bridge City,” said Smith.

“We have a very popular lunch crowd, because we specialize in getting people in and out real quick,” said Chipman.

“It takes about five minutes to get your food,” said Smith.

Chicken fried steak is their best seller in Port Arthur. “We’ve got a chicken fried steak about this big,” said Chipman as he indicates with his hands about 9 inches in diameter. “We give you so much food, it’s unbelievable.”

Smith said they wanted to open a second location and several of their Orange County customers kept asking them to open one over here. That’s when they found the location off Texas 87 and have spent the last five months getting it ready. The restaurant will seat 90 people.

“We’re a full service catering and dine-in restaurant,” said Chipman. They also plan to offer meal delivery to the local plants. “In Port Arthur we do Huntsman. We supply all the overtime meals there.”

In Port Arthur they were voted the “Best Plate Lunch” for 2019. Gift cards are available at the Port Arthur location if you need a last minute gift.