Photo: Orange City Council member Terrie Salter takes time away from taking photographs to smile for one during last week's special appearance by Santa Claus at the OCARC vocational training and counseling center in Orange. Record Photo by Dave Rogers

Terrie Salter rode to the rescue and Santa Claus and his elves joined her in the back of a stretch limousine to a surprise Christmas party at OCARC.

“This is phenomenal,” said OCARC’s director, Sandy McCormack said. “Terrie has just absolutely blown me away what she has done.

“This is above and beyond, and so appreciated by all of us.”

Salter, an Orange City Council member, found out on Tuesday Dec. 17 that OCARC Signs, Trophies and Industrial Engraving was without a Santa Claus for its 41 special needs clients who receive vocational training and counseling the Park Street complex.

“I asked Ms. Sandy, when Santa was coming there to see them and she said their Santa passed away two years ago and they didn’t have one,” Salter said.

“This broke my heart.

“So I told her I would try my best to get her one.”

By Thursday Dec. 19, she had a new Santa booked for the rest of his life.

“I help Santa Claus on the side as a fun job for me to do,” Butch Campbell, director of external affairs at Lamar State College Orange, said about his prior holly, jolly experience in a red suit, long white beard and matching hair.

“When I received a call from my Lions Club friend [Salter], I said I’d be more than happy to help OCARC.

“They’ll have a Santa from now on, if they’ll have me. I always admire what they do at OCARC. It’s a fabulous mission.”

RB Limousine Service picked Santa up for the trip to see the men and women.

Apparently, the sleigh was booked. But Santa didn’t ride alone. He was joined by a dozen or so Elves from LSCO.

“We have a group at campus that I’ve always picked on, or relied on, any time we need to do some kind of fundraisers,” Campbell said. “I refer to them as my elves.

“So I immediately sent out a message to the elves and asked if it was feasible for us to do this in two days. Within a few minutes, I started to get phone calls; some donating food, some donating money.

“I’m not really surprised when it happens, but I’m always overwhelmed by it, because this group really gets organized.”

The surprise for the OCARC workers was a big hit.

What began with a text from Salter at noon Tuesday was a full-blown wingding that kicked off 45.5 hours later, at 9:30 Thursday morning.

Besides a visit with Santa, the men and women each received a Christmas stocking full of gifts plus several gift-wrapped presents. 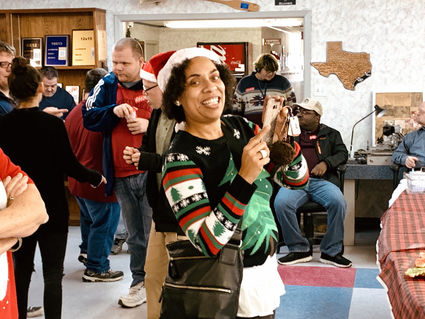 Tables overflowed with food trays and desserts. But not for long.

“I’ve done this Santa Claus helping job a long time,” Campbell said, “and I don’t think I’ve had more fun, or more rewards than helping out at this OCARC deal.

“I looked up at one time and all my elves were teary eyed. There’s no doubt that we get more help from these things than all the people we go out to help.

“It was another Orange miracle.”