Thankful for Family and Friends at Christmas

Photo: Roy doesn’t stray too far from his roots. The pump is the actual one he drew water from as a boy.

From childhood Christmas to present, quite a ride...

The joy of Christmas for me has taken drastic turns as I’ve traveled down this life’s highway. Raised a very poor youngster in south Louisiana, I had very little to look forward to on Christmas morning. We lived in a small, one-room shack, raised by a single mom. A lot of people were poor but real poverty, hanging at our door Christmas morning, brought very little. A fruit, a piece of rock candy or maybe a three-inch piece of a big peppermint stick.

The highlight of my Christmas, which I’ve written about before, was midnight Mass at St. Mary Magdalene Church that sits on a knoll, on the banks of the Vermillion River, in downtown Abbeville. The beautiful mass was said in Latin, the Gospel spoken in both French and English. The large choir sang beautiful hymns. The service was that of the Old Catholic faith. My grandmother and I would brave the weather to walk the two miles down the dirt roads to attend the service. Little did I know then that my lasting memories of my childhood Christmas would be that midnight service.

As a child in that poor situation I had no idea where life would take me. Back then, we just lived it day to day without much expectations. Poverty is an awful ordeal, much worse for a youngster. Even though I couldn’t express myself in English until age seven, which caused me to fail the first grade; I was blessed with a quick mind and early childhood talents. I also had a burning will to succeed. I still can’t stand losing.

I had a loving mother and grandmother even though mom and I were more like a brother and sister because I was born when she was so young. Those two beautiful women were my blanket in those formative years. I still miss them today. We had nothing but I wouldn’t trade the love they gave me for all the great toys of the world or the Christmas trees we never had.

I survived those Depression years and my youth and just after my teen years, I met and married Phyl and we started a family of our own. Christmas for our youngsters wouldn’t have any resemblance to the ones I spent as a child. Maybe we went a little overboard but I always wanted them to have the things I couldn’t have. Christmas gift giving today has gotten ridiculous however. I see with my grandchildren and other youngsters. One gift is considered a poor Christmas even if it were a $300 gift. These youngsters have been robbed of the appreciation because it comes so easy. I just wonder what memories they are making of their childhood Christmas.

Despite my early beginning, life has been very good to me. I wouldn’t trade it. At this time of year however, I miss family. Over the years we had large family gatherings, at Christmas time, now our parents, grandparents, aunts and uncles are all gone. So many friends we spent this season with are also gone. It’s hard to comprehend that the poor little boy, in the small Cajun town, is now the senior monarch of the family that came along.

This Christmas Day we are truly blessed. Phyl and I, now in our 80’s, are indeed fortunate to still be around and for our family, having us around is something to be thankful for also. This year we won’t have the big gathering of years past. Some of our offspring have scattered and can’t make it home this holiday season. Our granddaughter Amber and her two boys, Luke and Liam, came for a few days two weeks ago. She and husband Clay have moved their practice from Kansas to Florida and are still trying to move into their new place. A Christmas surprise, Amber has informed us they are expecting another healthy boy, three boys in four years. 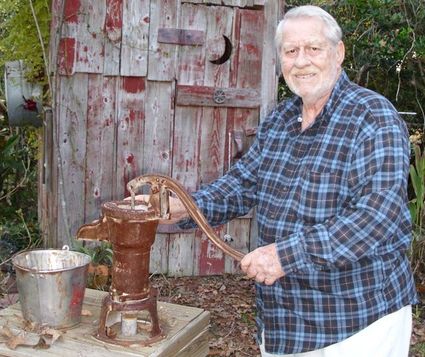 Meanwhile, granddaughter Jenna and Robby have recently moved from New Hampshire to northern Massachusetts where they purchased 75 acres of mostly underdeveloped wooded land. Jenna wants to raise her family to appreciate the simple life, cows, chickens, etc. Their four children are Nate, a high school senior, our oldest great grandchild, two girls Delilah and Willow and two-year-old Chase. We are thankful that Amber and Jenna’s families are both doing well and are healthy.

With us this Christmas will be our three children Mark, Allen and Karen and our three grandsons, Garrett, Sean and Collin. Also, of our eight great grandchildren, Garrett’s two children, Leland and Juliana will be with us. As you get older each Christmas becomes more special. We’re thankful for our many friends and wish them and their families a very merry and blessed Christmas. May the birth of the Christ Child be forever in our hearts. Merry Christmas to all from the Dunn family.