Photo: Roy and Phyl, the newly weds, attending her prom. That same night they moved into their first apartment.

A charmed life, 65 years with my partner, my wife.

It was Friday, the last day of the year of 1954. The date didn’t hold any particular significant. The year had seen the New York Giants win the World Series over Cleveland in just four games. In fact, that game was the first color television broadcast. “Determine” won the Kentucky Derby. President Dwight David Eisenhower had been elected in 1953. Allen Shivers had succeeded Texas Gov. Beauford Jester, who died in 1949. Shivers, who worked with my father and my mother-in-law in Port Arthur, was elected in 1950, 1952 and 1954.

The duplex apartment rent, at Mrs. Bryley’s in South Park, our first home, cost $55 a month furnished with utilities. She lived on one side, us on the other. Walls thin as cardboard.

All department stores in downtown Port Arthur were on strike. In fact, the strike ended Dec. 31. That would hold some significance in a later conversation. I was earning a living selling cars and later would become one of the county’s best door-to-door vacuum cleaner salesmen. An education that would pay off many times over a life filled with different business ventures.

Back in June 1953, Maxie Foster, a friend, and I attended a place in Port Arthur called “The Beehive,” a teenage cantina on Proctor Street. I met a few pretty high school girls but on later visits there was always one who seemed special. The olive-skinned beauty spoke in a soft, shy voice and was more a listener than a talker. There was no doubt this was the gal I wanted to spend my life with. The odds were against a lifetime union. She was mature, from a stable home, with a refinery working dad, a stay-at-home mom and an older sister. I was a drifter whose background was poverty, raised by a single mom, a hustler getting by on my wits.

Fast forward to Dec. 31, 1954. It was a nice morning and we had agreed to meet down the street from Phyl’s house at a certain time. We picked up a friend, Margaret Hunt, who had agreed to be a witness or bridesmaid. She would accompany us to Kountze where a lady J.P. would marry us. Clarence McNelly, the clerk, would issue the license.

We needed a blood test to get a license so several days before, not knowing where to go, I pulled into Hamilton’s Clinic in Beaumont. The doctor and employees were surprised at our request. No one getting married had ever chosen their place for a blood test because it was a hemorrhoid clinic. How in the world could this marriage ever fail with this great start at the hemorrhoid clinic. They didn’t even charge us and the doctor gave me $5. I told him I would be back if I ever needed his services. Many times, I’m sure I’ve been a pain in the butt but never returned. However, I never forgot that gift or that great start.

We married and returned to Port Arthur. Phyl attended Bishop Byrne Catholic School and had it been discovered that she was married, she wouldn’t have been able to graduate in May. The next few months we lived apart with only Margaret knowing about the marriage. Phyl finished school and 10 months to the day, on Oct. 31, our first child Mark was born. Two others followed, Allen two years after Mark and finally four years later, Karen, the girl Phyl was waiting for. Five grandchildren and eight great-grand kids and one on the way have followed.

Phyl nearly got caught that New Year’s Eve by her mom when she was asked about the picket lines at downtown businesses. Phyl said they were still up. They had come down while we were tying this 65-year knot in Kountze.

It’s been one great story after another. A trip Down Life’s Highway with a great partner. She will readily admit it hasn’t been boring. Like the unexpected, unplanned wedding, she never knew what tomorrow would bring. Our friend Margaret married Dalton Terro a year or so later and they have spent all these years together. Every year on our anniversary she contacts Phyl. 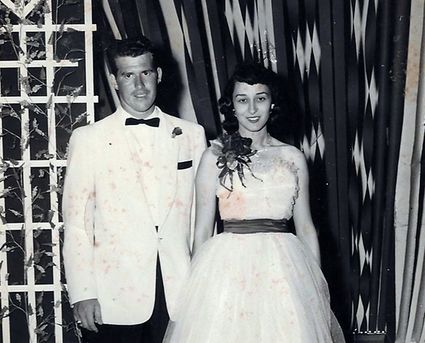 The most surprising is how quickly those 65 years have traveled. The odds for any couple making so many years are not very good, not only because of divorce but also sickness or death figures in. We always beat the odds but if it ends tomorrow, it’s been a great ride.

Over the years we have lost hundreds of friends. Each one very special When we married, all those years ago, we both had plenty of relatives, today they are nearly all gone.

Phyl and I squeezed so much into one lifetime. That crazy start had all the elements for failure. It was really beating the odds. It’s a great life we’ve been granted. We have been indeed fortunate. We’re thankful for our friends and relatives who have traveled with us down this life’s highway. And to you Phyl, thanks for buying that crazy notion on New Year’s Eve so long ago and for being my rock through all these wonderful, blessed years.