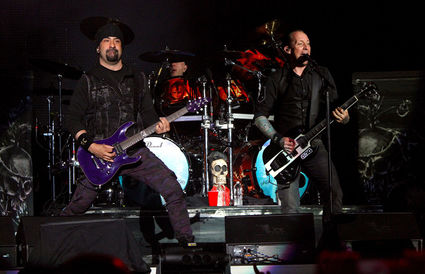 Danish rock act Volbeat announced its spring tour this week and has scheduled an appearance in Southeast Texas for April 11 at Ford Park Arena in Beaumont.

Volbeat, along with special guests Clutch and The Picturebooks, will be performing at Ford Park Arena in Beaumont on Saturday, April 11. Tickets go on sale at 10 a.m., Friday, Jan. 17, at all Ticketmaster outlets and online at http://www.ticktmaster.com. Ticket prices were not immediately available.

Volbeat, which formed in 2001 in Copenhagen, is touring in support of its August 2019 release, “Rewind, Replay, Rebound.” The album peaked at number one on the Billboard Top 200 albums chart, but it reached number one in four European countries.

The Maryland-based rock act Clutch is touring in support of its 12th album, the September 2018 release, “Book of Bad Decisions,” and has performed in Southeast Texas twice previously at venues in the Crockett Street Entertainment District in downtown Beaumont.

The Picturebooks will be opening the show as the duo supports its forthcoming album, “The Hands of Time,” which is due to drop on March 8 via Century Media.

Visit http://www.fordpark.com for more information on this and other events at the entertainment complex.