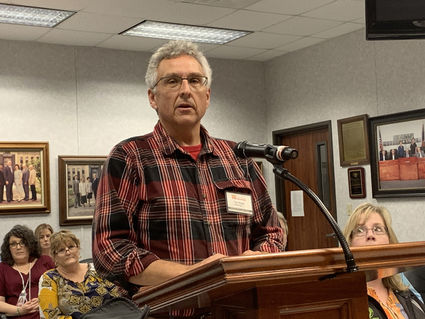 Photo: Tim Slagel of HarvestCall, the outreach arm of the Apostolic Christian Church in Illinois, explains to Orange County commissioners Tuesday that his group works “to try to put as many homeowners back in their homes as we can” and is currently working to rebuild 20 flood-wracked homes in Orange County.

Early voting for the March 3 party primary elections is only about a month away and Tuesday, Orange County commissioners set voting locations, dates and times.

There will be four early voting sites open during the dates of Feb. 18-28, one in each county precinct, but residents may vote early in any of those.

Those who wait until Election Day, March 3, to vote must cast their ballot at their voting box, of which there are 34 in the county.

Applications for ballots by mail must be received at the Elections Administration, 123 S. 6th St. by Feb. 21.

Commissioners voted to spend $5,723 to buy a new copier and maintenance contract for County Court At Law and OK $1,937.65 for the parks department.

County Clark Slacum got commissioners approval for his Road and Bridge crew to make 150 round trips of 40 miles to Lumberton, at a cost of $4,500 just in gas, to pick up $21,000 of recycled road material donated by the Texas Department of Transportation.

He also delivered a 40-minute monthly report to explain paperwork he had previously emailed to county leaders showing the status of his department’s projects.

He said the county’s landfill had used its annual 2020 budget already in just the first three months of the budget year because of being open six days per week and because of above-average demand after Tropical Storm Imelda.

Kurt Guidry, maintenance director, noted in his monthly report of repair projects that most of his department’s work at Claiborne West.

Other ongoing work is at the Vidor courthouse, where the former Probation Office is being transformed into a sheriff’s substation; at the UTMB building and the District Attorney’s Annex.

He said paperwork on the Precinct 2 office/sheriff substation in Mauriceville is complete and construction should begin by the end of the month.

Grant administration work for acquisition and elevation projects was awarded to Traylor and Associates.