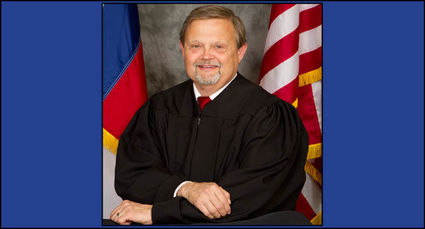 Dennis Powell wasn’t born in Orange, but he got here as soon as he could.

And the old Orange High debater has been a fixture at the Orange County Courthouse for four decades. Most recently, he’s served nearly five terms – 20 years – as 163rd District Court Judge.

Powell has announced he will not run for re-election. Local lawyers Rex Peveto and Michael Catt will square off to replace him in the March Republican primary.

Powell and his wife of 38 years, Connie Shelley Powell, are building a retirement home in central Texas and, at the end of this term [also the end of this year], they will watch the sun set behind the gentle slopes of the Hill Country.

“That’s the plan,” he said of working through the end of the year.

“It’s easy to kind of coast when you see the end, but I want to keep my work current. I’m committed to do that.”

Moving his courtroom docket along is one of things Powell is proudest of when it comes to his days in a judge’s robe.

“Keeping our docket extremely current is one of the things I’m very pleased with,” he said. “That requires working hard and working smart.

“Right now, there are three people in the county jail waiting on a trial in this court, and that’s high for us.

“Controlling the docket is very important for speedy trials. If you go to other places, a guy might be sitting in jail a year or two before going to trial. That’s just not right.”

Powell says the key is his “lick log,” another term for the moment of decision regarding whether the case will go to trial or end with a plea bargain. He says he brings both sides in a case to the lick log when a case is announced.

“In a lot of counties, the defendant’s moment of decision is the morning of the trial,” Powell said. “Our deadline for plea bargaining is at announcement.

“They’ve learned I mean it; no plea bargaining after announcement. People that ask for a trial at announcement, they’re going to trial. So, no deals. What’s left is the case I’m going to try.”

“Family law cases are very emotional and intense, especially when there are kids involved. By the time you say horrible things about your spouse and drag out the worst of your dirty laundry, those wounds rarely heal.”

So, mediators seek compromise from both sides, keeping the bad feelings out of the courtroom.

Out of the courtroom, Powell said he has always described himself as a fisherman and golfer.

“But I don’t fish or golf anymore,” he said. “I didn’t quit. It just got squeezed out. I hope to squeeze it back in.”

Powell was playing in Branson, Missouri to play golf in the summer of 1999 when he took a long distance call from Judge David Dunn letting him know Dunn planned to retire.

Several months earlier, Powell had notified Dunn of his desire to be his successor.

And that phone call set the stage for what is still referred to as the most expensive race for elective office in Orange County history.

Besides Powell, the names on the ballot were Alan Sanders, Jerry Pennington, Rodney Price, Karla Rogers and Marcia DeLarue.

Powell and Sanders went to an April run-off before Powell won the seat.

“And we put it to good use.

“I could do TV [advertising]. I wouldn’t have done that had I not had the money. And we bought a lot of targeted direct mail.”

Powell said he was criticized because many of his donors were fellow lawyers.

“The truth is lawyers are the ones most affected by the judiciary,” he said. “Average people are more interested in who can fix the roads and clean the ditches.

“We got a tremendous amount of support from the bar and we were able to raise from each side [plaintiff and defense] of the bar.”

One thing Powell had to do, however, was switch to the Republican Party for his last two runs.

“The straight ticket vote flipped in Orange,” he explained. “It was apparent any Republican candidate could beat me as a Democrat.”

Powell, 64 years old with three children and seven grand-children, didn’t start out to be a lawyer or a judge, though he was a runnerup in the Stark Reading and Declamation Contest.

He came to Orange as a seventh-grader when his dad, Buster Powell, moved to town with the Owens Illinois paper mill.

He spent two years at Texas A&M on an engineering scholarship.

“I discovered I was not interested in being an engineer,” he said.

Instead, he won a debate scholarship to Lamar University, where he graduated with a teaching degree. Then it was off to Orangefield, where he taught a year of eighth-grade math.

“I’d had some incredible teachers in high school that shaped my life,” Powell said.

“I thought I’d be like them and I wasn’t,” he said. “I think being a really good teacher is a gift, and I knew by January, I wasn’t cut out to be a school teacher.”

Next stop was the University of Houston law school.

“That was a very interesting decision since I’d never been in a courtroom,” Powell said. “But having debated in high school and college, law would not be an unusual choice.

“I think God put that thought in my mind.”

While in law school, Powell worked “in the family business” which no longer involved paper mills.

His mother and father, Anne and Buster Powell, owned Spinning Wheels roller rink on Highway 87 and near it, the Ridge Runner country-western club.

“I ran the rink part-time and the club part-time while I was still in law school,” he said. And he made it full-time for a while.

“By the end of law school, I wasn’t sure I was going to practice [law],” he said.

Almost a year later, in the spring of 1982, he took the Bar Exam, passed and opened up a law office.

“Fortunately, I did everything this court does. If I’d known where my career was going to take me, I’d have done everything I did to get ready.”

Powell spent nearly two decades in and out of the Orange County Courthouse representing clients. Then he told David Dunn he planned to run for his seat on the bench after the sitting judge retired.

“The same way I felt a direction to go to law school, I felt directed to be a judge,” he said.

Powell says he has tried several capital murder cases but none that resulted in the death penalty.

The worst of his job are “cases where I’m just astounded with how much pain a human being is able to inflict upon another human being.”

But the best of the job makes it worthwhile, he said.

“The best part of being a judge is that when I was a lawyer, the sides picked me and I took the position that benefited the side I was on.

“As a judge, I get to do what I think is right. When I do that, I feel like I make a difference in people’s lives.

“It’s not always earth-shattering. But every once in a while …

The judge said he occasionally gets stopped by another shopper while out in a store.

“Somebody will walk up to me and say ‘Do you remember me? You put me in prison.