Joseph Scott is fed up with neighborhood trash and Larry Spears, the Mayor of Orange, is not going to take it any longer.

Scott appeared at Tuesday morning’s city council to complain about vacant lots at the corner of 10th and John Streets, behind EZ Pawn on 16th Street, that are covered with construction trash and garbage.

“It’s looking really, really bad,” Scott said. “And it needs to be cleaned up.”

“I want to put the hammer down on these businesses and people that have decided to blatantly disrespect our community,” he said. “It’s time for a change.”

The mayor said he had instructed new city manager Mike Kunst to place a discussion of the current ordinance on the next city council agenda, in two weeks.

“There’s been a lot of buzz,” Spears said. “I want to discuss our ordinance and make some changes.”

The open space at the end of the EZ Pawn parking lot Tuesday included several broken toilets and sinks, at least one bathtub, several couches, old tires and empty bottles.

“People have been dumping trash, and they’re doing it late at night, or I would say something to them,” Scott said.

“I guess they think because there’s only two houses on the street, that this is not an important area. But yes it is. One day we actually had to get out of the car and move stuff to the side in order to pass through. 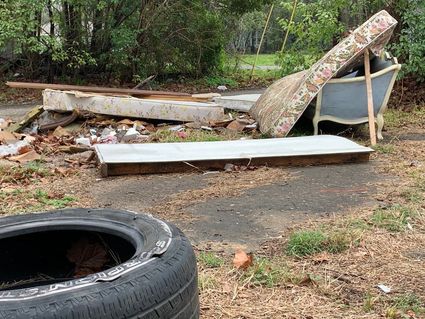 Spears pointed out that council members have joined with Keep Orange County Beautiful to host an Adopt-A-Street cleanup to pick up litter around St. Mary School from 8 a.m. to 10 a.m. Saturday, Jan. 25.

Volunteers are invited and asked to meet at the St. Mary School parking lot.

The mayor said his 2020 vision for the city of Orange is “finishing what we’ve started and appreciating what we have. We want to finish what we started in 2019.”

Also at Tuesday’s meeting, council OK’d a $154,000 contract to LD Construction for the Allie Payne Road Repair Project, awarded $168,000 to Elite Contractors for rebuilding the bridge and roadway on Pier Road, near the Orange Boat Ramp and went into closed session to hear an update on Chevron Phillips from Jay Trahan, the city’s EDC director.