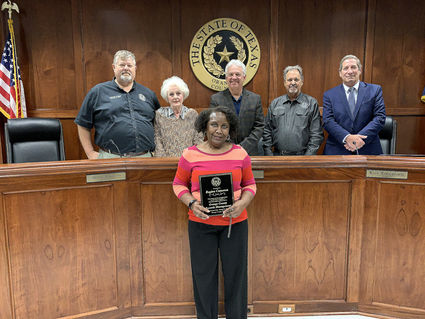 The Orange County Commissioners said goodbye to a longtime faithful servant and took a required step to landing a highly new addition Tuesday.

About an hour and a half after thanking retiring Records Department Director Regina Cameron for 20 years of service, County Judge John Gothia closed the weekly session by announcing that a vote on an abatement agreement for the proposed $6 billion Chevron-Phillips Chemical plant would be on the agenda Feb. 18 for Commissioners’ Court.

Under a new state law, agreements made under Chapter 312 of the Tax Code, the Property Redevelopment and Tax Abatement Act, require 30 days advance posting and this notice was posted at the courthouse on Jan. 17.

The commissioners had the agreement listed on the agenda before Christmas but took no action at that time, saying the final language had yet to be worked out.

Chevron-Phillips has said it plans to spend up to $8 billion on the world-class plant, including architectural, engineering and permitting costs, but has not announced where it will be located.

It says the project will employ as many as 9,000 people for construction and end with about 600 permanent high-paying jobs.

The City of Orange disannexed about 400 acres so all 1,800 acres could be in a Reinvestment Zone created by the county; the city is running water lines from Interstate 10 and the Bridge City and West Orange-Cove school districts have granted Chapter 313 tax deals.

Just in case the multinational company based in The Woodlands decides sometime this year or next to build there.

The county paid $612,578 in weekly bills, including $228,281 to pay Orange County’s share of the annual budget for the Regional Crime Laboratory.

Sheriff Keith Merritt said the county’s share was based on usage and this year’s bill was less than last year’s.

Commissioner Johnny Trahan announced that beginning March 3, the Orange County Landfill would return to its pre-Tropical Storm Imelda schedule and at that time would begin charging for its service again.

Beginning March 3, the landfill will be open to Orange County residents from 7 a.m. to 6 p.m. on Tuesdays, Thursdays and Saturdays.

Trahan said the county will no longer require people to acquire stickers and payment cards to use the dump, but any cards still out there will be accepted through the end of 2020.

Charges for dumping are $1 per bag up to $20 for a double-axle trailer. Items that will not be accepted are dead animals, commercial waste, appliances with freon, vegetation, propane bottles, paint, hazardous waste, tires, batteries and shingles.

The commissioners also approved an agreement with the Southeast Texas Regional Advisory Council (SETRAC) on a Catastrophic Medical Operation Center (CMOC) for medical support, resources and services during disaster events.