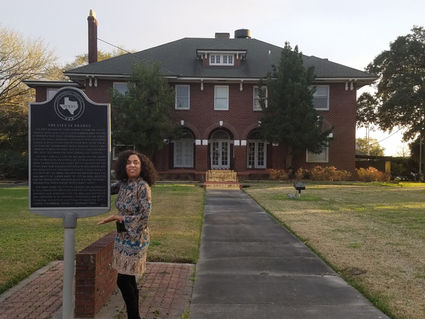 Photo: Orange city councilwoman Terrie Salter feels the historic city hall just vacated will be a perfect project for “Home Town Takeover” to get it ready for its next life.

Several members of the Orange community met Monday night at Roberts Meat Market and Steakhouse to discuss and brainstorm ideas to submit the city of Orange for HGTV’s new show “Home Town Takeover.” Ben and Erin Napier of the hit series “Home Town” will hit the road for their upcoming series to help a community revitalize the place they call home. They plan to renovate an entire town.

The buzz started last week. The call for submissions was made Jan. 8, but Orange just caught wind of it last Monday and several people started making plans to get it done. Deadline for submissions is Feb. 7.

Community leader Chris Kovatch said a friend of his posted it on Facebook. That is when he saw it. He thought it was a great idea and would be perfect for Orange. Kovatch made a simple post on Facebook sharing the submission post from HGTV and asking “Anyone game to work on this with me?”

Unbeknownst to Kovatch, Councilwoman Terrie Salter was also putting a plan in motion. She had also discovered it on Facebook.

“I phoned our Mayor and he was ecstatic about it,” said Salter. “After he verbalized his support I went into action to set up a meeting, but I was not the only one thinking this would be great for the City of Orange.”

Monday’s meeting was set to discuss the opportunity and what the city wanted to focus on for the submission.

“This contest provides yet another opportunity for the people of Orange to come together working as a team for a common goal for the city,” said Salter.

About 15 people were in attendance. Salter and Childs represented the council. Ida and Tim Schossow were there for the Greater Orange Chamber of Commerce. Several other members of the chamber, representatives of other organizations and commercial interests attended and had input in potential locations to focus on.

David Derosier suggested focusing on 16th Street, citing many of the houses on 16th can be or have already been converted to businesses and he felt it is an area that needed some attention. He also talked about Simmons Drive and locations near the Sunset Grove Country Club.

Other attendees felt the downtown area and possibly Simmons Drive are areas that should be concentrated on since interesting architecture were mentioned in the submission documentation.

“I believe that Front Street, in front of the County of Orange Court House, Simmons Drive traveling up Green Avenue up to the railroad track would be the area I support to be renovated,” said Salter. “I feel that this area is the heart of the city capable of offering upscale, accessible, family friendly, river front and more.”

Childs presented a plan for baseball fields on Simmons. He acknowledged it was probably beyond the scope of the project, but felt if we put it in the submission as proposed future projects, it could show planned future growth for the city whether selected or not.

The submission requirements are: 1. a population of less than 40,000; 2. Homes with great architecture longing to be revealed; 3. a main street that needs a facelift.

Orange has all three. 1. Current population is in the neighborhood of 19,000; 2. Orange has homes with amazing architecture, many, more than 100 years old that would create great visual content during makeovers; 3. Green Avenue has sections that look great and other areas that need attention.

Finding homes with great architecture that need renovation are not in short supply after all the storms that still have people recovering.

The program doesn’t say how many buildings they plan to renovate, but the series is planned for six shows.

Once the submission is made, it will go radio silent due to nondisclosure language in the submission. There will be no word on if Orange gets selected until/and if construction begins. Even then it will be hush hush due to strict nondisclosure clauses in reality TV contracts. So don’t ask, they won’t tell; just keep your fingers crossed that in 2021 we start seeing construction going on in town and the powers that be are silent. If there is lots of activity and nobody’s talking, maybe we made it.

“I believe that this would be life changing for the City of Orange,” said Salter.