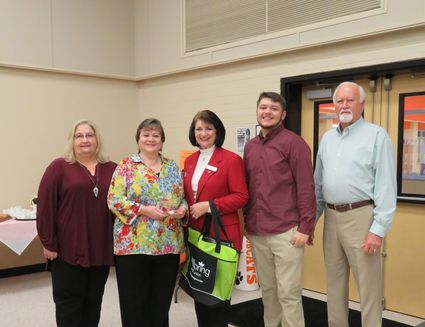 The Bridge City Chamber of Commerce is delighted to announce that Karen Morgan, Director of Finance for the City of Bridge City, has been named December Employee of the Month.

Karen was nominated by Lucy Fields who said, “Karen is a great asset to Bridge City who deserves to be recognized for her hard work.”

Morgan has worked for the City of Bridge City for 27 years in various positions, Utility Clerk, Court Clerk, and Financial Assistant before being promoted to Director of Finance in March of 2001.

Karen, said, “I have assisted in most every office at City Hall at some point in time (Utility Billing/Collections, Court, Accounts Payable, Purchasing, City Secretary, Permits and Finance).”

Prior to coming to work at the City of Bridge City, Karen worked almost 10 years for Safeway grocery stores as a Cashier, Customer Service Clerk, and as an Assistant Manager. Karen said, “I then worked about 5 years for Dick Walker, CPA who taught me so much that has led me to my current position with the City.”