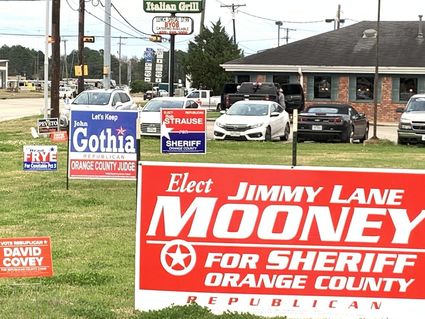 Running for a high-paying and powerful office in a contested county-wide election ain’t cheap, as Orange County election campaign filings point out.

Candidates for Sheriff, County Judge and the 163rd District Court raised more than $60,000 collectively for their campaigns and spent more than $50,000, according to their Jan. 15 reports.

Rob Strause, a sheriff’s deputy seeking to replace retiring Sheriff Keith Merritt in a job that pays $106,080 per year, reported $19,773 in campaign contributions.

Fundraising is ongoing for the March 3 Republican Party primary that will decide who is sworn in next Jan. 1, as no Democratic challengers filed for the Nov. 3 Orange County elections.

The campaign finance reports, required by the Texas Ethics Commission, cover the final six months of 2019, though some candidates also reported the first 15 days of this year.

They show different strategies and accounting choices and some interesting reading.

A closer look shows that $6,195 of Johnson’s funds came from a dozen attorneys, mostly from Orange, and his expenses include $3,670 in refunds to those attorneys.

Johnson is running unopposed but had an announced opponent, Mike Marion, when he received the lawyers’ contributions. The refunds came after Marion did not file for a place on the ballot in early December.

“We looked at what came in and what we had spent. We decided we’d refund everybody about half what they gave. We actually spent about half.

“We spent too much on T-shirts. Signs, we had most of our signs from 15 years ago. We decided to wait on signs until he filed with GOP.”

Another large refund was noted by Strause, lowering his net fundraising total through Jan. 15 to $15,773.

“They wrote me a check off the wrong account,” Strause explained. “As soon as I refunded it, they swapped it for new personal checks.”

Strause’s expenses include $7,273 to Orange’s Dominion Forms for signs and $1,876 to Lamar Advertising for a billboard. Besides the Guilbeauxs, Donovan Weldon of Orange donated $2,000 and Wesley Dishon of Bridge City was credited with a $1,300 in-kind donation paying for an electric billboard.

Jimmy Lane Mooney, the Precinct 4 constable who is running for Sheriff against Strause, listed $6,662 in contributions through Dec. 31, and $8,988 in political expenses.

The math works if you note Mooney listed $8,238.91 as “political expenditures from personal funds” and checked the box noting “Reimbursement from contributions expected.”

Mooney’s big individual donors were Kelly Brewer and Robert Norton, both of Vidor, for $1,000 each; and Kenneth and Lori Weaver of Orange, for $750. J.W. Dalton, owner of Top Deck in Mauriceville, is credited with an in-kind gift of $750 in hosting a meet-and-greet for the candidate at his warehouse.

Topping Mooney’s list of campaign expenses was $6,862 to Designer Graphics of Tyler for advertising.

Chadrick Robison, a $1,000 giver, is the only Orange lawyer listed.

The same is true for Peveto’s donors. Seven of the eight contributors listed giving a total of $6,250 on his report are from outside Orange County. Paul Henderson, a $500 giver, is the only Orange attorney on the list.

The filing shows the lawyer reporting $5,356 in “unpaid incurred obligations,” which are listed as unpaid December invoices from DDM Marketing of Lumberton.

DDM is a well-established Southeast Texas firm that counts among its clients First Financial Bank, the Ferguson Law Firm, Julie Rogers Gift of Life and Claybar Funeral Home, among others.

It handles all of Peveto’s conventional and on-line advertising and was the recipient of most of the candidate’s listed expenses, save a $1,500 filing fee and $325 for Facebook ads.

Local business owner Chad Havens was the biggest donor for Gothia, writing a check for $5,000. Ross and Eva Smith, owners of Akrotex and Sabine River Ford, kicked in $2,500 and R.E. Odom added $1,000.

The former Chamber of Commerce chairman shopped locally, spending 99 percent of his $7,164 in political expenditures in Orange County, writing checks for $2,489 to OCARC and $1,598 to CCR Graphics.

Ernest Bayard, a blueberry farmer from Vidor who is Gothia’s opponent, did not file a Jan. 15 campaign report.

There will be two other contested races on the GOP primary ballot: County Commissioner Precinct 3 and Constable Precinct 3.

Brad Frye, current assistant police chief at Bridge City, reported $2,300 in 2019 contributions for his campaign for Precinct 3 constable, with $3,353 in political expenses.