At 40 years of age, Sam Carpenter, Jr., looks like he could still run it up the middle for one of the football teams he used to play for.

But the longtime City of West Orange policeman says if he’s elected Constable for Orange County Precinct 3, “I’ll be one of the oldest constables in the county.”

Frye, who graduated from Orangefield High a decade before Carpenter turned the tassel at Bridge City High, was a Texas state trooper for 17 years before he jumped with his Department of Public Safety boss, Paul Davis, to work for the City of Bridge City Police Department in 2010.

The Precinct 3 constable’s job is currently filled by Mark Philpott, who has announced his intended retirement for the end of the year.

Precinct 3 covers the south side of Orange County, its jurisdiction reaching slightly into south Vidor, parts of Pinehurst, West Orange, the Orangefield school district and the city of Bridge City.

A constable serves as bailiff for Justice of the Peace Court, serves warrants and serves and protects the community, patrolling streets and neighborhoods.

Carpenter, the son of a Lamar University football legend whose own running back exploits at Bridge City High earned him a scholarship to Sam Houston State, echoed Frye.

“This [being elected constable] will allow me to serve people a lot more, and also allow me to help more local agencies, like the Sheriff’s Office, Bridge City,” Carpenter said.

“It’s a lot bigger jurisdiction. Right now I’ve only got about five square miles of West Orange. Constable 3 is going to make it 10 times bigger, the area that I serve.”

Carpenter returned from college to Bridge City in 2000 and met and married his wife, Mitzi. The couple have three daughters and a son.

He began his criminal justice career as a corrections officer for the Sheriff’s Officer, then two years later went to work for the Federal Bureau of Prisons at the corrections complex in Beaumont.

Carpenter moved to policing at the West Orange Department. He worked in criminal investigations for four years, then transferred back to patrol for a more flexible schedule that would allow him to rebuild a home flooded by Hurricane Ike.

He has earned endorsements for his candidacy from the Orange County Sheriff’s Office Deputies union, the West Orange Police Association, from Philpott, the current Precinct 3 constable and from former constable John Ford.

“I like to think my work history speaks for itself,” Carpenter said. “It was a privilege to be trained by John Tarver on patrol, and Jesse Romero taught me how to be an investigator.

Frye, like Carpenter, was raised and educated in Orange County. He has been married 27 years to his wife, Sandy, and have two children, Savannah and Brayden.

He graduated from the Lamar Police Academy in 1990 but his law enforcement career actually began a year earlier as a dispatcher for the Bridge City Police and Fire Departments.

After getting his police certification, he needed another year to find a full-time opening, so he worked as a reserve officer for the Vidor and Bridge City PDs.

Bridge City hired him as a full-time patrolman in 1991 and two years later he applied and was accepted by the DPS.

After a six-month boot camp, he started as a trooper in Orange.

In 2001, Frye went to a 90-day K9 handler academy and he and his dog were responsible for an area of East Texas stretching from the state line to Houston and Lufkin. Together, the partners made traffic stops and worked drug interdiction.

In 2004, he was promoted to sergeant and supervised troopers at the state Capitol in Austin.

A year later, he was transferred to Matagorda County and worked human trafficking cases. His traveling ended after he transferred back to Orange County after the devastating Hurricane Ike.

“I wanted to help with the recovery,” he said. “I helped the community rebuild after Hurricanes Humberto, Gustav and Ike.” 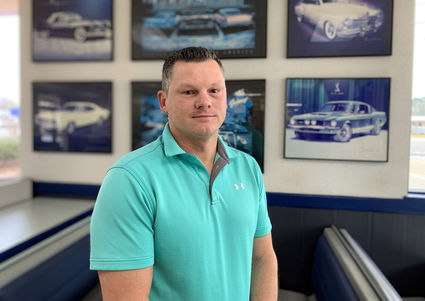 Frye has served on the Orangefield school board for eight years.

Endorsing him for election are the Sabine Area Labor Council, the Vidor Police Officers Association, Cherokee Search and Rescue and retired Precinct 3 Justice of the Peace Flo Edgerly.

“I believe I’m the most qualified and well-rounded in terms of experience,” Frye said. “I have the love and passion to serve my community, which I’ve done all my life.

“I’m probably one of the only assistant chiefs in the state that gets out and works the street. I’ll help anybody that will ask.”