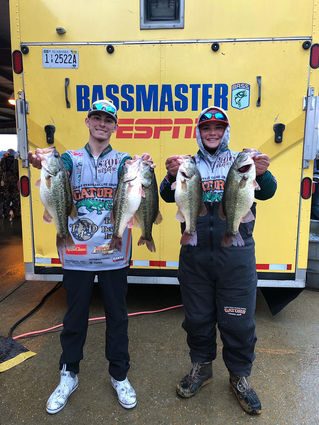 Not bad for openers.

Fregia is a sophomore from Orangefield, while Tindel is a freshman from Little Cypress-Mauriceville.

Their high finish wins them a place in the Bassmasters College Series nationals which will be held this summer.

A registration snafu had the Gators fishers on a wait-list, unsure if they could participate until shortly before Thursday’s 6 a.m. sendoff.

“It’s a huge deal, what they did,” Tom Johnson, LSCO’s president, said.

Fregia and Tindel were in seventh place after the first of the three-day competition, with their biggest five-fish bag of the tourney, 16 pounds, 14 ounces. They fell to 10th after Friday, still high enough to make the top-12 cut for Saturday.

“We never got a big bite during the tournament,” Fregia said. “We caught a lot of fish that looked like basically twins. They looked alike and weighed alike.”

The two LSCO fishermen met at Sam Rayburn during the summer of 2019 and decided to team up.

“I saw he was a really talented angler,” said Tindel, who fished on the LCM team from junior high on.