Ernest Bayard is 77, known for his bushy, powder-white “Sam Elliott” mustache, and he supplements his retirement income by selling blueberries and eggs.

The Vidor resident says he is running for Orange County Judge “because I feel like I can do some good – whatever good is, whatever the citizens of Orange County allow me to do.”

He will be on the ballot in the March 3 Republican Primary election against current County Judge John Gothia.

The 58-year-old Gothia (pronounced Go-THE-yay) was elected County Commissioner for Precinct 3 in 2016 and served 2-1/2 years, until being appointed County Judge in July 2019 to fill the seat won in 2018 and then vacated by Dean Crooks.

Next month’s county judge race will be only for a two-year term, since that’s how much remains of the four-year term Crooks resigned from.

The winner of the March 3 GOP primary will face no Democratic opposition but will face re-election in two years. That race will be for the usual four-year term.

“I think that my involvement with the community is a good reason for me to be here,” Gothia, a Bridge City native and former Chairman of the Greater Orange Area Chamber of Commerce, said when asked why citizens should vote to keep him in office.

“I didn’t just show up because I have a sudden agenda of any kind. I’ve just always been involved in my community and want to continue to do that.”

said in Monday that he doesn’t like the way Orange County is being run.

“This county is not controlled by its citizens. It should be,” Bayard said.

In the same interview, the owner of Bayard Farms in Vidor, says: “I don’t want to see anything change -- except the atmosphere in the county.”

He said, “the drug problem is really bad,” noting he’d lost family members because of it. Bayard also stressed that many school children are not getting the parenting they need.

He called himself “an agitator” and said, “I want to be a professional motivational speaker.

Besides the Chamber, Gothia has worked with the United Way and Red Cross locally.

Referring to Bayard’s concern about doing more to fight the scourge of drugs, Gothia pointed out that in the county, the Sheriff’s Office is the primary weapon. 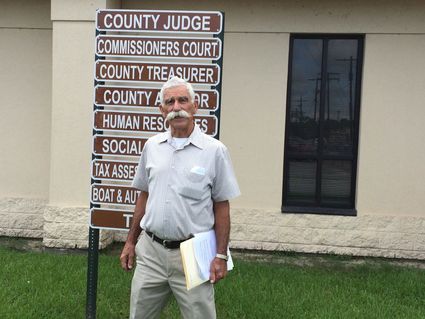 “We have some of the state programs that go through our county health department that we help fund, that we get the grants for,” Gothia said. “So we do support health initiatives, we do support our Sheriff’s Department in anything we can afford to do through our budget.

“That would primarily be a Sheriff’s Department focus, and the [commissioners’] court’s role in that is supporting them as much as we can with the financial needs they have to do drug interdictions or drug programs.”