Rutledge has lived in Bridge City since 1960. He attended school in Orangefield and Bridge City. He worked as a pipe fitter until getting a degree and becoming a mechanical engineer. Rutledge admitted he “flunked retirement” after retiring from DuPont Sabine River Works in 2013. He currently works at Neches Engineers.

“Now in his second term as mayor, he has become involved not only in city government, but also statewide issues,” said Beth Arnold while listing his many accomplishments. Arnold is the outgoing chamber president. She said Rutledge represented Bridge City and cities across the state during the 2019 state legislative session testifying on impending legislation. He has been designated as a “certified municipal official” for five years in a row.

Rutledge and his wife love to travel to exotic places and hope to do more after his next retirement. One thing you may not know about the mayor is he plays the bagpipes.

Lanie Brown gave a special presentation, “to the best looking guy in a bow tie,” from the office of Congressman Brian Babin

“I’ve never met a politician yet that would shy away from a microphone,” said Rutledge as he stepped to the podium after receiving his award. He said after a meeting the other day in city hall there were a group of people talking about attending the banquet. “As I got close I heard a quote that really stuck with me. Commissioner Roccaforte said, and I quote, ‘Boy you see what happens when I miss a meeting.’ So thank you very much to MOST of the chamber.” He got a good laugh.

“I thank you for this. It’s a little overwhelming and I really don’t know what to say right now because I’m a little bit tongue-tied,” said Rutledge.

He acknowledged last year celebrating with Rebecca on the 50th anniversary of dating. “Not marriage,” he said, “dating.” They have been married 46 years.

Earl and Shirley Duhon received “Business of the Year” honors for the oldest business in the city, Dupuis Tire & Service Center.

“It has been a part of the Bridge City history for 79 years,” said Arnold. It has been locally owned and was established by Paul Dupuis in 1941. Dupuis retired in 1967, when his son Kenny Dupuis took over. The Duhons purchased the historic business in 2016.

“It continues to thrive and offers first class service to this day,” said Arnold.

“Thanks to each and every customer that has walked through that door,” said Shirley Duhon after the banquet “and each and every employ we have. We are here to serve the public.”

The gavel was passed to next year’s president, Candace Mulhollan of RE/MAX One.

Outgoing president Beth Arnold made several announcements for the year’s successes including the Designer Purse Bingo that sold out within 15 minutes and raised over $15,000. 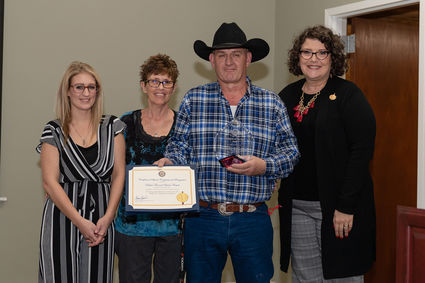 The Christmas Light Parade had the largest attendance to date and largest number of entries, 70.

Applications for scholarships are now being sought and the amount will increase from $500 to $600 this year, due to funds raised through the Christmas tree silent auction. Two scholarships are available for each Orangefield and Bridge City High Schools.

Upcoming events for the Bridge City Chamber of Commerce:

Taste of the Bayou will be held in April and the Founders Festival celebrating 50 years since Bridge City’s incorporation will be held July 3-5. Booth spaces are now available and can be reserved by contacting the chamber office.