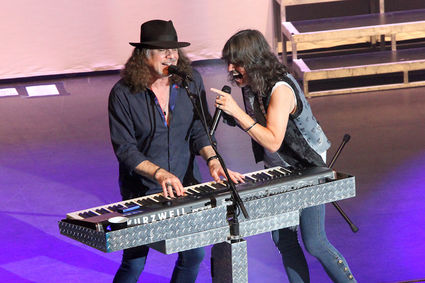 Rockers Tom Gimbel, at left, and Kelly Hansen, along with the rest of their bandmates in Foreigner, will be performing at the Golden Nugget Casino in Lake Charles, La., on Saturday, Feb. 15 for ages 21 and older. A limited number of tickets remain for this event.

Legendary rock act Foreigner returns to Southwest Louisiana just in time to help rekindle the romance and the rock.

Foreigner will perform at 8 p.m., Saturday, Feb. 15, which happens to be Valentine’s Day weekend, inside the Grand Event Center of the Golden Nugget Casino in Lake Charles, La. A limited number of tickets remain for this highly popular event and can be purchased at http://www.goldennuggetlc.com starting at $60 each.

Now entering its sixth decade as a band, Foreigner has sold approximately 80 million albums around the world behind the strength of its numerous hit songs, such as “Juke Box Hero,” “Hot Blooded,” “Dirty White Boy,” “Urgent,” “Cold as Ice” and ballads “Waiting for a Girl Like You” and “I Want to Know What Love Is.” According to multi-talented musician Tom Gimbel, the reason is simple for why the band continues to be such a popular touring attraction.

“This music has all of these great elements to it,” Gimbel said in a recent telephone interview. “Mick (Jones) knows how to put this sophistication to it and he comes up with these great melodies, and people can really relate to the words, you know? People know what our songs feel like.”

Although the show at the Golden Nugget Casino is strictly for ages 21 and older, Gimbel said at many of its other performance the diversity in the ages of its fans its very noticeable.

“We really do see a broad spectrum of people in our crowds, and that’s a great thing,” he explained. “It’s amazing to see teens, young adults, and people who have been life-long fans at our shows at the same time.”

Gimbel has been in Foreigner for nearly 25 years and has enjoyed the adventure every moment. He had served as touring keyboardist for Aerosmith from 1989 to 1995 with a brief fill-in stint in Foreigner in 1992 before getting the job permanently in 1995.

“I got recommended for the spot in Foreigner by a guy who saw me with Jon Butcher,” Gimbel said. “He knew I could play keyboards, but he also knew I could sing, play saxophone and play guitar. Well, he was playing golf one day with a record guy who worked with Foreigner and found out they needed a new guy and he said, ‘Do I have the guy for you.’

“I felt so fortunate to get this opportunity,” he continued. “I always wanted to play guitar in a band, and, in Foreigner, I get to do that as well as play keyboards and saxophone and sing.

The casual Foreigner fan may not realize just how impressive the band’s music catalog really is until you see the band in concert. The entire set list could easily be comprised of nothing but hit singles on any given night.

“If you were to write down all of the Foreigner songs that people know on pieces of paper and toss them in the air, then you could write our set list that way,” Gimbel said with a laugh. “There are so many songs that it is too hard to leave things out. We have a ton of fun every night and we do change things up here and there. It’s a great thing to have that kind of problem deciding a set for the night.”

Many bands from the 1970s and 1980s who still tour rarely put out new music anymore, but the occasional band will surprise its fans and release new material from time to time. Gimbel said there are no immediate plans but he knows to never say never.

“Mick is always working on something,” he said. “He is always writing, whether it’s something new he is working on or even if it is an older song that he has been working on again. He has written well over 500 songs, so it wouldn’t surprise me if he decides to put something out at some point. There’s just no telling when or how it might be done.”

While Foreigner is keeping the tour trail hot this winter headlining medium-sized venues, the group is looking to make 2020 a solid year with big plans ahead for the spring and the summer.

“We are heading over to Europe later in the spring to play shows with Whitesnake and the band Europe,” Gimbel said. “Whitesnake is such a great band and a great group of guys, and Europe, the band, is just amazing live. It’s unbelievable how phenomenal that band sounds.

“That tour will set the table for our summer tour in America because we are bring Europe back to the states with us and we will have Kansas along for the tour as well,” he continued. “Those guys are like our brothers and we couldn’t be more excited. I think it’s going to be a great treat for our fans and should make for a great summer.”