The 2000 six-way election race for the 163rd District Court bench was the most expensive in Orange County history and the dollars flying in and out in this year’s 163rd District race are just as impressive.

Rex Peveto and Michael Catt, who are squaring off March 3 in the Republican Primary election to fill Powell’s seat, are spending more per opponent than their predecessor.

Expect to see plenty of them and their advertising before the election. Early voting begins Monday, Feb. 18.

As was the case in 2000 for Powell, the majority of money raised has come from fellow attorneys who office outside Orange County, mostly in Beaumont.

As a sitting judge rarely draws election opponents out of the challengers’ fear they might lose and hurt their chances in that courtroom, the same goes for local lawyers not wanting to support one judge candidate for fear that candidate’s opponent will win.

“There are a lot more lawyers and larger and wealthier law firms in Beaumont,” Catt explained. “And Orange lawyers don’t like to give money and upset the other side.

“If you’re a litigator, which is what I am, I try as many cases against Beaumont attorneys, if not more, as Orange attorneys.

“Every person who’s given me money is a friend of mine.”

Peveto, a third generation politician based in Mauriceville, and Catt have no shortage of friends.

And a lot in common.

Their ages are about the same. Peveto has worked as an attorney in Orange County for 25 years, Catt for 23 years. Their wives both grew up in Orange County and work as school teachers. Each couple has three children, and both candidates have been involved for years coaching youth sports.

Both men say they have wanted to be a judge since they were young.

“I came to the courthouse with my dad, and thought it’d be great to be a judge,” said Peveto, whose dad, Wayne Peveto, opened the Peveto Law Firm in 1967 and spent 12 years in the Texas Legislature.

While Peveto earned a bachelor’s degree from Lamar University and then a law degree from the South Texas College of Law, Catt was born in Lubbock, where his dad was a Baptist minister, and lived in Buna and Grand Saline, near Tyler, before attending Tech and the University of Texas Law School.

“I always thought that I would be a judge, eventually,” Catt said. “It was just something I wanted to do. It was just a question of timing.

“This election made a lot of sense.”

Krispen Walker, an Orange County Assistant District Attorney, was an early favorite to win Powell’s office, but she withdrew from the race a few months ago.

Catt said he was encouraged to run after Walker and Peveto had announced their intentions.

“I was the last candidate to enter this race, a month or so behind my opponent and the other candidate that withdrew. During that time, I can’t tell you the amount of calls I got from other attorneys and law enforcement officers telling me, ‘You have to run,’” Catt said.

“They’ve either tried cases with me or against me, or they’ve been witnesses or investigating officers. They know what kind of person I am.

“They all said, ‘You’d be the best judge we can think of … you need to get in this race.’”

This is Catt’s first run for elective office since student government at Texas Tech.

Peveto served nine years on the Little Cypress-Mauriceville school board, where he and his children went to school. He is employed by the City of West Orange as city attorney.

Both Catt and Peveto said their careers have prepared them perfectly for the cases that come before the 163rd District Court.

Peveto notes that he is one of a few attorneys in Orange who agree to serve as court-appointed defense attorneys for indigent clients.

While Catt argues he has the best-suited experience for the job, trying “multiple jury trials per year and multiple bench trials per month,” Peveto boasts of a $2.9 million verdict he won for a client in a medical malpractice case.

“Being an attorney, you help people one client at a time, which is satisfying. But a judge can help more,” Peveto said.

Peveto has been endorsed by the Orange County Sheriff’s Office Employees Association, a union for deputies, and Catt has won the endorsement of the Beaumont, Vidor and Pinehurst Police Associations, as well as that of the Sabine Area Labor Council.

Both candidates have been active in their churches. Peveto boasts he has taught Sunday School for 20 years while Catt has served as church deacon.

Peveto helped start the Little Dribblers youth basketball program in his area and coached his sons through youth leagues. Catt is also a longtime youth coach who continues coaching kids after his have grown up.

Catt is also an adoptive father, who says that nearly 50 percent of the 2,500 or so family cases he’s handled were adoptions.

Two rounds of financial reports submitted to the Texas Ethics Commission for the candidates reveal Catt has raised $25,089, including $18,000 from Beaumont law firms, and spent $10,380 while Peveto is so far funding his campaign largely from his own pocket.

Catt has listed $18,406 in political contribution “maintained” as of Jan. 23, the most recent report. 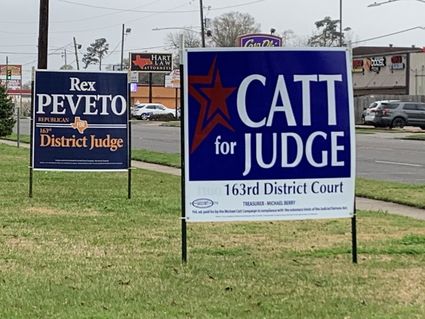 Does he plan to spend all of that between now and the election?

“I’m going to spend that and more,” he said.