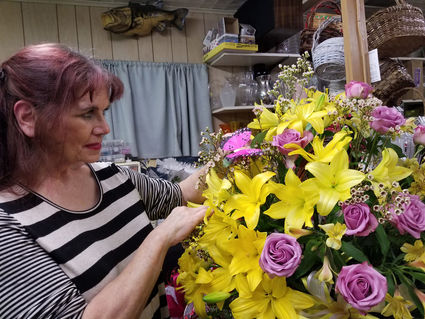 Linda Shinkle and her ladies at Wayside Florist and Gifts, Inc. are gearing up for their biggest day of the year: Valentine’s Day.

“Roses, roses, roses,” is what Shinkle says is the main seller for the day of love. When they sell out of roses, they will do regular arrangements, but they always sell out. Valentine’s Day tends to be a last minute kind of holiday vs. Mother’s Day, which is their second biggest day of the year.

“You won’t be able to get in this door Thursday and Friday,” said Shinkle.

“Now Mother’s Day, they order early, because the wives do it.”

Although they do about the same amount of orders for Mother’s Day, Valentine’s Day put’s more money in the cash drawer. “They don’t spend so much on their mothers.”

Bridge City’s iconic flower shop was started in 1948 by Eileen and J.O. Harrington at its original location behind the Wayside Inn on East Roundbunch Road.

It moved to 160 Bland in 1954. Shinkle has framed photos of the current location when it was being built and the inside when it opened. The Harrington’s lived in a house behind the shop on Bland.

Shinkle started working at the flower shop as a teenager. “I was in high school and in college part-time and wanted to earn some extra money.” She said she started working at a few shops in Port Arthur before joining the Harringtons in Bridge City. “I came over here one day and put in my application; and she hired me.” Shinkle has been there ever since.

“What got me in the flower biz is everyone wanted my bows. I make super fantastic bows for some reason,” she said. Shinkle started out doing funeral work and deliveries. “…and then you just learn. And if you don’t learn, you fake it. You get on the internet and look it up and say, ok, I can do that.”

“This is my 48th Valentine,” said Shinkle.

One memorable bouquet ordered by a former Bridge City physician for his wife several years ago contained six dozen roses and was so big it took two people to transport it to Nederland.

The majority of the work they do year round is anniversaries, birthdays and funerals. “I don’t do weddings anymore,” she said.

“It’s changed so much since the internet, it’s not like it used to be,” said Shinkle. “You work for the wire services now… You’re the third person now…The personal touch has left. You don’t really talk to people so much now, like you used to.”

It cuts down on the amount of creativity she gets to use, too, because most of the time they are recreating the pictures people order from on the internet.

She said the situation today makes it difficult for newer flower shops to survive and many fail, but Shinkle says she is doing well because the shop has been established for so long. “I’m not going anywhere. I’m doing fine. It’s just the business has changed so much.”

Shinkle has no plans to retire anytime soon.

It’s not too late, to order flowers for Friday, but don’t wait much longer if you want it delivered.

“I’ll take local orders, if I can,” said Shinkle. “I try to take care of Bridge City. You can only deliver what you can deliver. You run out of time.”