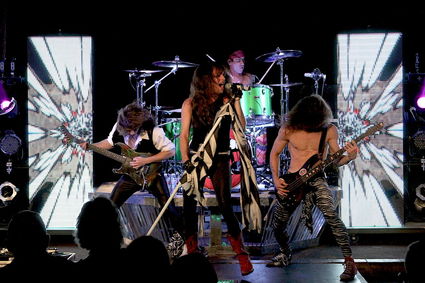 The music of the 1980s returns in style on Friday night as hard rock and glam music tribute band L.A. Roxx performs at the Riverfront Parade in downtown Orange as part of the Flashback Parade and Mardi Gras celebration.

It’s time to break out the Aqua Net, the neon color shirts and the spandex pants because the ‘’80s are back this Friday.

The Orange Convention and Visitors Bureau, along with the Greater Orange Area Chamber of Commerce invite the public to the 17th Annual Mardi Gras Weekend celebration this weekend in downtown Orange.

The fun kicks off at 6:30 p.m., Friday, Feb. 14, with the Flashback Parade which begins and ends at Division Street in downtown Orange. It travels the usual route with fans being able to line the streets of 10th Street, Green Avenue, 1st Street and Front Street in anticipation of colorful beads and lots of fun.

Following the parade, it is time to jump in your time traveling DeLorean and travel back to the 1980s with regional tribute rock act, L.A. Roxx. The band has been a popular attraction in Southeast Texas and Southwest Louisiana for several years and specializes in music by artists which made the ’80s so memorable, such as Bon Jovi, Poison, Motley Crue, Def Leppard, Whitesnake, Guns ‘N Roses, Ratt and so many more.

Those who attend the parade and the concert are encouraged to dress in their best 1980s attire and take part in the “flashback” event, which is free and open to the public.

For more information on the parades or Mardi Gras weekend, contact the Orange Convention and Visitors Bureau at 409-883-1011 or the Greater Orange Area Chamber of Commerce at 409-883-3536.