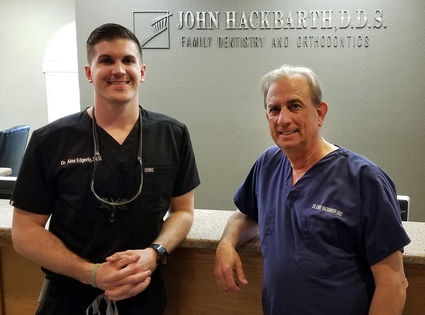 "I am beyond thrilled to be given the opportunity to work alongside Dr. Hackbarth,” stated Edgerly in a letter going out to the entire practice. “After years of private practice in Port Arthur, Texas, I am finally returning home to care for my community.”

Edgerly graduated from Orangefield High School in 2009 and did his undergraduate studies at Lamar University, before going to the University of Texas Health Science Center School of Dentistry at Houston. Edgerly earned his Doctorate of Dental Surgery in May 2017 and has been in private practice in Mid-County the last two and a half years.

Ready to grow his practice, Edgerly approached Hackbarth about joining him in Bridge City to be closer to home.

“My wife and I, we are getting close to preparing for a family, so this is where we wanted to be to raise a family,” said Edgerly. “We’ve started those conversations, but we wanted to be established and be back home before we started.”

The timing was perfect. Hackbarth had been looking for the right person to join the practice.

“I’m just at a point in my life, it’s time to slow down,” said Hackbarth. “I’ve been practicing since ’78. I really wanted somebody local to continue the practice.” Hackbarth said he had been looking for the right partner for about a year to a year and a half.

“Being from here, it was always my goal to return home,” said Edgerly. “Even in dental school, I talked to everyone in the area, including Orange, so I kind of knew everybody’s timeline. I just cold called him and said, ‘Hey, can I come talk to you?’.”

“We have a very similar treatment philosophy,” said Edgerly.

“We are not a clinic,” said Hackbarth. “This is quality, patient centered, individualized care. We really cater to the patient’s needs. Clinics get caught up in volume. We aren’t that way. It’s a big difference,” said Hackbarth.

“These are people I see at St. Henry’s, Market Basket and so the experience is a big deal for us,” said Edgerly.

The partnership has gone well so far.

“It’s been more than I hoped for, actually,” said Hackbarth. “The patients have been very, very receptive.”

“Fantastic, I would say,” said Edgerly. “My dad works at a plant in Orange, my father-in-law works at a plant in Port Arthur. My wife is from Bridge City, my grandma, Flo…most people know of somebody on my in-laws side or my side, so I try to find some kind of relation there. It makes it easier, makes it a little less shocking.”

“Dr. Hackbarth always enters the room with me and introduces me to the patients. They are used to seeing him there, so we want to make sure they still see him,” said Edgerly. “He’s not going anywhere.”

Edgerly will be taking on all the new clients and general dentistry needs as Hackbarth focuses more on orthodontics and implants as he reduces his hours.

“We just want to assure all our patients that Dr. Hackbarth will still be here, just on a limited basis,” said Hackbarth. “I intend, hope, if all goes well, to be here for quite a while.”

“I think Doc’s got a few more years in him,” Edgerly joked. “He’s ready to slow down and I’m ready to hit the ground running.”

“I enjoy what I do,” said Hackbarth. “Dentistry has been good to me, it’s just time to slow down, that’s all. There is a lot of benefit to having two doctors here.”

“I think it has been very beneficial for both of us,” said Edgerly.

The practice has been at its current location, 825 West Roundbunch Road, Bridge City, since 2003.

They also have two full-time hygienists on staff.