Petition asks OF board to honor Coulter

The night Coulter died at age 48 after a lengthy fight with cancer, Jan. 6, Graffagnino posted a change.org petition to rename Orangefield’s football stadium in Coulter’s honor.

More than 1,300 people have signed the petition, she said Monday as she presented a copy to school district trustees at Orangefield’s monthly board meeting.

Her request was altered, though, to have the district name the football field, the track, or the road behind the high school after Coulter.

“Originally, I wanted to rename the stadium in his honor, but that was too much,” she said.

Orangefield’s football stadium has been known as F.L. McClain Stadium for about four decades. McClain was named Orangefield’s principal in 1957 and served as schools superintendent there from 1963 to 1988, overseeing much of the district’s campus construction.

The board, led by Dr. Ron Risinger, accepted the petition, with Risinger promising that the elected school officials would schedule a vote on how to honor Coulter at an upcoming meeting.

Coulter was an all-state lineman for Orangefield High and was recruited to Kilgore Junior College. He completed his schooling at Stephen F. Austin State University and taught and coached for one year at Deweyville before returning to Orangefield schools as a science teacher and coach.

He coached football, basketball, track, powerlifting and softball for the Bobcats.

The district’s three campuses are being monitored by 111 video cameras and access to the buildings is via keycards.

Amanda Jenkins, principal of Orangefield Elementary, reported that the PTA and families and friends of students in grades pre-K through 5 and life skills classes raised $43,580 for school improvements during their two-week Adventure Dash Feb. 12-21.

Not long after, the board approved the expenditure of more than $30,000 for playground upgrades at the Elementary campus. Those were paid for partly from funds raised through last year’s Adventure Dash, partly by grants from the PTA and the J.J. Watt Foundation.

There was enough Adventure Dash cash from 2019 to fund a new sound system for the cafeteria. 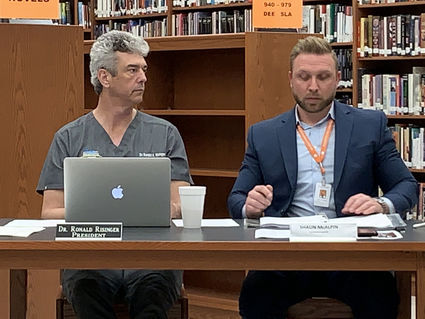 This year’s $43,000-plus in donations met several challenges offered by staff and administration.

Once the drive topped $40,000, teachers had to take a ride down a slime-covered slip-and-slide.

For his part, McAlpin, the superintendent, had to eat a cricket.

“I don’t know if everybody eats crickets, but mine tasted like bacon,” McAlpin said.