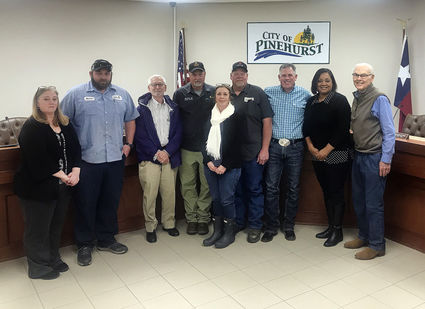 It’s beginning to look a lot like Christmas in Pinehurst.

If Santa Claus was the U.S. government whose sleigh was pulled by the Texas General Land Office.

The city just received $6.8 million in Hurricane Harvey money and are ready, willing and able to apply that to modernize city infrastructure and fix roadways.

“The City of Pinehurst, like every city in Orange County, was devastated by Harvey,” City Administrator Robbie Hood said.

The 2017 storm had lost its hurricane winds by the time it hit the upper Gulf Coast but stalled over Southeast Texas and created the worst single rain event in U.S. history, with some places in Orange County receiving as much as 60 inches of rain in a four-day period.

The funds will be spent on three major projects:

- Rebuilding the electrical room for the city’s wastewater treatment plant and raising it off the ground to avoid future flooding;

- repaving 8 miles of streets, including West Park on the north side and Lexington and Concord on the south end of the city.

“Let me give our staffers some kudos,” Mohon said. “In Pinehurst, though we’re small, we got our [Harvey] recovery started faster.

“When our [contracted] storm debris hauler said it couldn’t start for a couple of weeks because it didn’t have anybody to direct traffic around its trucks, our staff all volunteered to direct traffic.”

The city will employ contractors to do the wastewater and sewer repairs.

“Initially, they’ll use a camera to inspect the sewer pipes, and they’ll camera it again when they’re through,” Hood said.

The pipes will be changed out by “pipe bursting,” a trenchless method of replacing buried pipeline in which the old plastic pipe is broken up as the new pipe is pulled through the ground to replace it.

“With pipe bursting, contractors don’t have to dig up the whole street,” said May, the city’s fleet manager. “They’ll just bore the old line out and feed the new line in.”

The city employees – as well as a city council headed by Mohon – is working hard to build community pride in Pinehurst.

Besides infrastructure upgrades, the city has begun a cleanup campaign based on code enforcement and an eye to see dilapidated residential and commercial properties torn down or renovated.

Mohon has said the city has plans to establish an Adams Bayou fishing spot off of West Park.

But the mayor most wants Pinehurst folk to be alert during the upcoming construction.

“When it starts this summer, we want to ask our citizens to be patient,” Mohon said. “There will be a lot going on, but when it’s finished, it will be worth it.”

Hood said the money from GLO did not require a local match.

“I want to personally thank our mayor and city council for the wisdom to approve these contracts so we can bring Pinehurst back to its full glory,” Hood said.