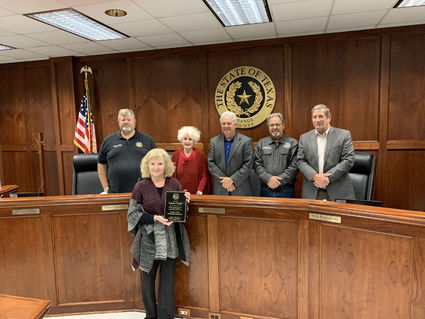 RECORD PHOTO: Dave Rogers Dave Rogers For The Record Commissioner Kirk Roccaforte celebrated his first county election last week by poking around under the hood of a county ride.

The former Bridge City mayor, who said he was turning over operation of Bridge City Radiator and Auto Repair to son Aaron when he took an interim appointment as Precinct 3 Commissioner last summer, told Tuesday’s meeting of Orange County Commissioners’ Court that he had personally checked out a 2009 Crown Vic assigned to the AgriLife department.

“Major mechanical issues” that would cost more to fix than the car was worth was the description given the vehicle that led to the agenda item of “providing and/or purchasing a vehicle for the AgriLife Department.” Roccaforte said he understood the issues developed after a routine oil change but before a trip to a Ford dealership service bay.

The commissioner said he’d driven the car and didn’t notice any problem, suggesting the Ford people may have fixed it.

He said he would let the county’s Road and Bridge mechanic “drive it around” a few days and see if a problem surfaced.

Fallon Foster, county extension agent, said her big concern was making sure the department had a safe ride for out-of-town trips.

Commissioners said they would re-visit the issue in a couple of weeks if necessary.

Besides Roccaforte, Orange County Precinct 1 Commissioner Johnny Trahan ran unopposed and won reelection in the March 3 GOP Primary which will count as a final election for the county as none of the races drew a Democratic challenger.

County Judge John Gothia won his race for a two-year term over Ernest Bayard and Carl LeBlanc finished behind Roccaforte in the commissioner race.

Both LeBlanc and Bayard were in attendance Tuesday and Gothia thanked all for avoiding negative campaigning.

Everyone agreed they would have liked to have a bigger turnout than the 13,837 ballots submitted.

Turns out the biggest change coming since the last commissioners’ meeting Feb. 25 is the retirement of Connie Cassidy, county purchasing agent.

After nearly 19 years of county employment, Cassidy’s last day will be March 20.

“I hate to see you go, but you enjoy it,” Trahan said.

The flip side was a series of checks for $414,170 payable to Ashbritt Environmental and Tetra Tech for storm debris cleanup.

Unlike the case after Hurricanes Ike and Harvey, none of that money will be reimbursable as there was no federal emergency declaration attached to Imelda.

With last week’s court session canceled because it fell on Election Day, commissioners paid two weeks of bills Tuesday, a total of $953,000.

The court approved a 2020 statement related to the 1998 Tobacco Settlement Distribution Program.

Orange County is set to receive $32,000 from the fund this year.

Kurt Guidry, county maintenance director, announced that the county records vault needed $20,000 to replace a unit required to control the humidity for microfilm and other records stored there.

He did offer some good news, saying work had begun to rebuild the Precinct 2 office in Mauriceville and to renovate the former adult probation office in the Vidor subcourthouse that will be home to a Sheriff’s Office substation.

Beauchamp, who has been working out of temporary offices since she took office in January 2019, was excited to see progress on the Precinct office.

“I was out there last Friday,” she said.

“Wow! I appreciate that.” After a closed, executive session, commissioners voted to approve a combined payment expected to be under $10,000 for two workers in Justice of the Peace Chad Jenkins’ Precinct 2 offices for accrued 2019 comp time, according to Denise Gremillion, legal counsel for the court. She said the workers had been unable to take comp days; at least one has since retired.