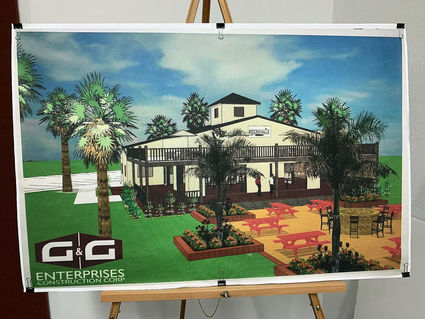 The long-awaited Boardwalk Grille hasn’t broken ground yet and already the city has decided to double the length of its $100-a-year lease to 50 years.

“This is one of the final steps to beginning construction,” Jay Trahan, city economic development director, said after Orange City Council approved action taken by the Orange Economic Development Corporation to allow for a 25-year extension for the restaurant.

Three extensions have been granted for groundbreaking on Jake Lemoine’s dream, a dream that is apparently shared by a devoted weekday lunch crowd that has filled his temporary location across the street from the Sabine River boardwalk.

The restaurant is to be located on the boardwalk at Fifth and Division Streets and resemble the Wheelhouse in Port Neches, with space for dining inside and out along the waterfront.

“They’re set to begin construction by May 1, subject to the weather,” Trahan said.

The original 25-year lease begins this year and runs through 2045. The extension will run through 2070.

The EDC and council saw a $200,000 infrastructure grant and the friendly lease as a great tradeoff to develop a must-go dining location downtown.

“First and foremost, it’s a riverfront destination that’s very attractive, right on the boardwalk,” Trahan said. “The restaurant is already very successful in its third year.

“The main thing is keeping residents and visitors here in the city of Orange, as opposed to leakage.”

Councilors also approved a $1.2 million contract with LD Construction of Beaumont for the 2019 Bond Program streets, south of I-10.

A vote passed for official acceptance of a $3.2 million Harvey grant from the General Land Office to be used for acquisitions of 30 homes that have suffered repetitive floods.

In a community workshop held March 3 to discuss upcoming work on Lions Den Park, council members heard from about 10 citizens and dispensed with the idea of replacing a now-shuttered playground there with a splash park.

Kelvin Knauf, city planning director, said the city had $537,000 available to build a new park but that the city wouldn’t be limited to that amount if the council felt more was needed than that money could buy.

The playground was closed in mid-February after a structural inspection found parts of it to be unsafe.

The playground was built 20 years ago over the course of several weekends with volunteer labor and largely donated materials.

“We appreciate the proactive decision you made to close it,” said Salvation Army Capt. Jan Zuniga. “It’s a hard thing to face when things that are beloved and part of our community have to face change. But thank you for thinking of the safety of those kids first.

“That safety issue is also first on our agenda wherever we take our kids, but I have to be responsible for kids whose parents hold me accountable for their safety.”

Mayor Larry Spears, Jr., said that many people on social media had indicated a preference for a splash pad before the March 3 meeting. But only one person spoke in favor of it at the meeting.

“They had their chance,” Spears said. “What I hear is people want a playground with an open concept and the splash pad is no bueno.”

The main objection to a splash park was that it would only be used during warm days and a playground could get year-round visitors.

Council member Terrie Salter said the mayor and council have talked about adding one or more splash pads to the city’s parks in the future.

The main complaints from citizens about the existing Lions Den playground had to do with fears about drug and sex paraphernalia and parents unable to see their youngsters at all times.

“The park is a regular field trip for us,” Zuniga said. “We do find issues during the daytime where our people have to go through and police the playground first. They do find people sleeping and have to clean up the areas before our child protection policies allow the children to play.”

James Lawrence, the parks director, said the park was nearly always locked at night, but sometimes city employees didn’t get to it.

A suggestion was made to add cameras.

“Security is a major issue,” Daryl Cowart said. “There should be zero, if possible, blind spots.”

Knauf wrapped up the meeting by thanking all who participated.

“This has been excellent guidance for the city council,” he said. “Late in March we’ll probably have an agenda item to formulate exactly where we’re going. We’ll come back in March and talk about some options.”