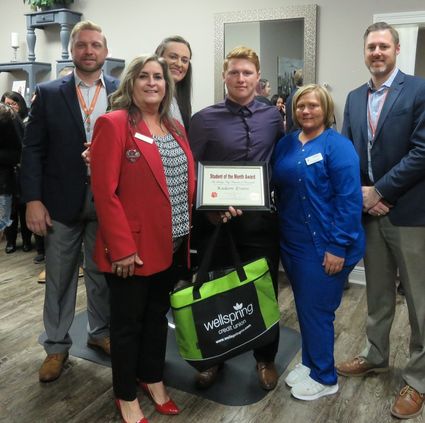 The Bridge City Chamber of Commerce is pleased to announce that the March Student of the Month for Orangefield High School is Kadeon Evans.

Kadeon was presented his certificate and gift bag by our Bridge City Chamber Ambassador Christy Khoury at the March Networking Coffee hosted by Best Day Spa.

“It has been a delight to know Kadeon. He has many strengths, including natural intelligence and a willingness to help others. Kadeon has a deep moral code and always makes respectable choices. I am certain that he will achieve excellence in his future. ”

“Kadeon is a great student and young man. He works hard and is always willing to help other students when needed. Kadeon has a wonderful, respectful personality. I can always count on him smiling and saying hello.”

“Kadeon just gets it. He is 100% committed to anything he involves himself in.

He's not afraid to be challenged or pushed. He has worked hard and earned everything he’s been given both athletically and academically. He has grown into

regardless of who is watching. What began as him working out on his own at 6am

before school in the mornings, has become the Breakfast Club & as many kids

from both boys and girls athletics have joined in along the way.

He has grown into a hard-working, dedicated Christian young man and set an

example for his teammates and classmates. For me, he exemplifies Colossians

not for human masters, since you know that you will receive an inheritance from

the Lord as a reward. It is the Lord Christ you are serving.

Engineering. He is currently undecided on his school of choice.

Kadeon accepted his award his with his mother Kadeon Evans. He was celebrated with