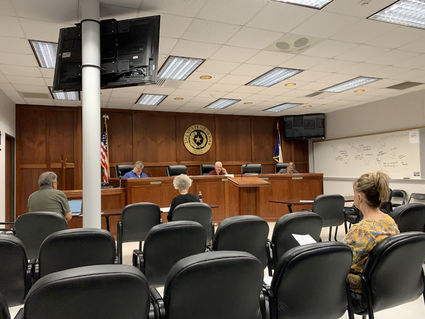 The information came in response to a question from County Commissioner Theresa Beauchamp at a bare-bones edition Special Session of Commissioners' Court.

Ardoin also said that as the numbers lined up Monday morning, Orange County stood to be second in line to establish a county-wide testing site for COVID-19. But he didn't sound like that was apt to happen for a while.

With only 10 people allowed in the courtroom in keeping with a Presidential order, the short agenda for the meeting included an official order delaying the state runoff election that was set for May 2, okaying a $10,000 initial payment to a company that would handle 2021 redistricting if needed after the 2020 Census and receipt of the February Auditor's Financial Report.

The real reason for the meeting on a Monday was to extend the Orange County Disaster Declaration for 30 days. County Judge John Gothia declared the disaster Tuesday, March 17, but it was for a period of seven days, according to state law. While Gothia, whose elected job makes him the county's Emergency Management Director, can rescind the declaration by himself, extending it requires a vote by the full commissioners' court.

The five court members unanimously voted to extend it through April 21, and plans to review the need to extend it at their next scheduled meeting, at 2 p.m. Tuesday, April 14. Commissioners voted last week to hold meetings every other Tuesday going forward, a decision made unrelated to the coronavirus.

Ardoin spoke during the public comment portion of the meeting and told commissioners that plans are for the five-county Southeast Texas COVID-19 Emergency Operations Area that includes Jefferson, Orange, Hardin, Chambers and Newton Counties, to open a single-site testing center at the Jerry Ware Terminal at Jack Brooks Regional Airport in Nederland, beginning at 8 a.m. Tuesday.

Both Ardoin and Gothia said the reason for opening a single testing site for multiple counties was because of a shortage of both test kits and protective gear for the workers. Gothia explained that 12 workers were required to set up a site and that hard-to-find masks and protective clothing had to be changed for each patient screened.

Through 5 p.m. Sunday, five cases were confirmed in the five-county region. Two of those were in Jefferson County and two were in Hardin County.

Of the 311 regional calls, 59 originated from Orange County, Ardoin said. From the 59 Orange County calls, 14 were referred for testing, which usually takes more than two days for a result. Eleven of the 14 test results were still pending Monday morning. Two were negative and only one positive.

Ardoin said that Orange county's 59 calls were the second-most received (after Jefferson County). He said that a second Southeast Texas testing site will open in the second-most affected county when and if supplies allow.

"The call center is staffed with nurses," Ardoin said. "It was set up to keep hospitals from getting overrun, because of the shortage of test kits.

"Callers will be triaged twice on the phone," he said, meaning the nurses will determine the priority of the patient's condition for treatment. "If the case warrants it, a nurse practitioner will contact the people by phone and they will be referred to a testing center, where they will be triaged again before being tested.

"There's a cost. They will take down insurance information if someone has it. And as they get test results back, they will be notified."

Ardoin said the testing center will be open five days a week only.

He said the five-county group had enough resources on hand to run for two weeks, including 280 test kits expected to arrive Monday.

"We will continue to seek resources for as long as we need," Ardoin said.

Gothia, commissioners Johnny Trahan, Beauchamp, Kirk Roccaforte and Robert Viator, County Clerk Brandy Robertson, Sheriff Keith Merritt, Elections Administrator Tina Barrow and a reporter from The Record Newspapers were the only constants in the room. Ardoin, County Auditor Pennee Schmitt and Assistant County Attorney Denise Gremillion shuttled in and out of the 30-minute meeting but Gremillion stood in a doorway instead of entering the room that normally seats about 60 people.