COVID-19 reality sinks in on OC

Photo: Cars of Texas State Troopers line up just inside the Texas state line at the Interstate 10 Texas Welcome Center parking lot in Orange Monday afternoon. The number of highway patrol cars parked went up from two to four during a half hour period but none of the four stopped any vehicles during that time. Photo by Dave Rogers

World and national news reports have shown spring breakers congregating at the beach and college kids hosting a COVID-19 party, not following expert advice or government’s order to stay at home and observe proper social distancing to slow the spread of COVID-19 virus.

Monday night, an area TV station brought us a family playing in the surf at Bolivar and declaring, “We’re all going to die – sometime.”

But it seems most Southeast Texans are beginning to take for real the threat of the fast-spreading new coronavirus.

Orange County numbers went from one confirmed case last Friday to seven at the end of Monday.

“The sooner we all cooperate to help in the safe distancing, the sooner we’re going to be able to come out of this thing when these numbers start finally dropping,” Orange County Judge John Gothia said Tuesday.

The Southeast Texas Regional Emergency Operations Center, which covers six counties including Orange, reported a total of 51 confirmed cases, with one death, at 4:30 p.m. Tuesday.

But it’s the outbreak in next-door Louisiana that has the attention of Orange County.

But Louisiana ranks above Texas with 4,025 confirmed COVID-19 cases and 185 deaths.

Texas Gov. Greg Abbott imposed travel restrictions Monday which ordered those crossing the borders between Louisiana and Texas to self-quarantine for 14 days.

The order exempted commercial truckers and those in the military, health or emergency responders or critical infrastructure. Residents of Texas that work in essential functions in Louisiana and vice versa will be allowed to come and go.

Abbott’s order instructed travelers entering the state by road to fill out a form with their quarantine location and contact information. Violations of the order, Abbott said, were punishable by up to a $1,000 fine and up to 180 days in jail.

He did say that his deputies had broken up several gatherings that were too large in the past 10 days.

Current Orange County emergency orders limit gatherings to 10 people or less and they are to stay six feet apart.

Deputies patrolled the Sabine River over the weekend and asked a number of people congregating on the sandbar halfway between the Port of Orange and Chemical Row, FM 1006.

According to Johns Hopkins University, the most heavily infected part of Louisiana is Orleans parish, home to New Orleans with 1,480 confirmed cases and 86 deaths. Large Mardi Gras gatherings in late February are cited as a reason.

The county entered last weekend with only one confirmed case but the new confirmations come after last week’s increase and testing and the associated wait for test results.

Confirmed cases 6 and 7 were announced Monday. 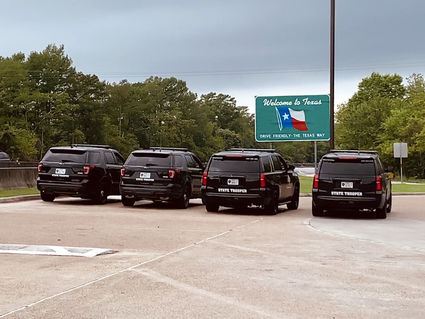 Tuesday, totals in the Southeast Texas Regional Emergency Operations area included 27 confirmed cases in Jefferson County including 16 in Beaumont and seven in Port Arthur; 13 in Hardin County including 10 in Lumberton; two in Tyler County and one each in Jasper and Newton Counties.

According to Orange County Emergency Management’s last Facebook update, 85 citizens had been tested for COVID-19 with 19 negatives and 59 tests still pending as of Monday night.