GONE BUT NOT FORGOTTEN

His constant smile and ever-present laugh were his trademarks. In the 50-odd years I had known him, I seldom saw Red Garrett when he wasn’t a true optimist. Mayor Brown Claybar told me recently of a quote Red made many years ago that stuck with him. It went something like this, “The law of averages is that everyone is going to have a bad day, I never have.”

As a young man, Red served many years in the Orange Jaycees and for seven of those years in the early 1960s, Red was chairman of the Jaycee Rodeo. He was responsible for bringing many movie and television stars to our area. Tex Ritter, Clu Gulager, Steve McQueen, Lash LaRue and Lefty Frizzell, who I got to be friends with after a night of partying after the rodeo.

once said at a rodeo performance, “All this county needs is more dedicated people like Red Garrett.

Through his years as a Jaycee, Red attained most of the awards presented to them including the “Distinguished Service Award.” His wife Pat, a registered nurse, served as a state director for the Jaycettes.

At that time the Jaycees were the most active service organization in the area.

Together Pat and Red traveled and attended meetings and conventions throughout the state.

It was at one of those functions that Red met a young man from Comanche, Texas named Ben Barnes.

He went on to become speaker of the Texas House for two terms.

He and Red’s friendship had grown through the years and when Barnes ran for lieutenant governor he picked Red to be his Orange County campaign manager.

At age 32, Barnes became the youngest man in state history to serve as lieutenant governor. He received two million votes, the first candidate in Texas ever to do so. While he was speaker of the House, Barnes had been named one of the 10 outstanding young men in America. President Lyndon Johnson and John Connally had both predicted the tall, good-looking redhead would someday be president of the United States. While he was speaker and running for lieutenant governor, Red and I attended strategy meetings in the speaker’s quarters and attended a big victory party in Austin after he won.

In late March 1971, Red got the lieutenant governor to come to Orange as guest speaker for the Greater Orange Area Jaycees’ Distinguished Service Awards Banquet. Even though Barnes wasn’t involved in the Sharpstown scandal that brought down many office holders, the backlash ruined Barnes’ bright political future. Red spoke often of what might have been. At age 35, Red received his Jaycee “Retirement Rooster” award and joined the Evening Optimists where a bunch of his friends served. I believe I’m the last surviving charter member.

Back before the 1950s, it was said that the Stark controlled Orange city politics and the Browns influenced county politics.

After Dupont opened in 1948 and Chemical Row sprung up, they supported employees who worked at the plants for political office.

They almost totally controlled the Orange City Council after the city manager form of government went into effect.

Red ran for council against one of the boys, D.E. “Pete” Campbell, a Dupont manager who made no secret of his involvement.

In two years he took on Chemical Row again.

He named his friend Joe Romano as campaign manager.

He ran a brilliant campaign while Red and I did the grunt work, putting up placards at night and distributing flyers and cards.

I learned a lot from Joe in that campaign that would serve me well later as a campaign manager.

Red went on to serve 12 years on the Orange council.

During that time, the city had the K.B. Green police chief scandal.

Roy Wingate was the district attorney who did the investigation.

Green and his wife fled in the middle of the night.

Red was responsible for bringing in one of the boys he grew up with in Brunner Addition, Jack Huffman, who served seven years as city manager.

No man I have ever known loved, respected and was more loyal to a woman than Red was to his wife Pat. She was a few years his senior and came with four children. Red adopted and cherished those youngsters like they were his own. Their offspring were his valued treasures.

When Pat became ill with Alzheimer’s Disease he cared for her at home as long as he could but was finally forced to place her in a Vidor nursing home. For the next three years, after closing his Garrett’s Auto Supply store each evening, he drove to the nursing home and sat with Pat until 10 p.m. He continued doing this even when she no longer knew him. He was dedicated to her to her last breath.

I recall lots of fun times with Red. He was a fun, upbeat guy. J.B. Arrington, who used to chase Red down the street for blocks with a cow prodder said, “If you would have dropped a hand grenade at his feet he would have laughed.” I recall the time he and his Democratic friends brought a donkey upstairs at the Yacht Club and left it. That was where all the rich Republicans congregated. 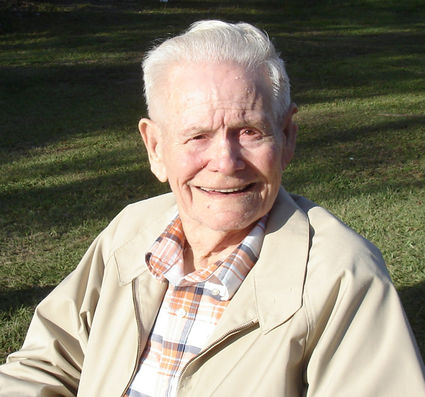 Red was raised in Brunner Addition of West Orange. The large family consisted of six brothers and a sister. Red saw a lot of sorrow in his life besides the death of Pat, his parents and siblings, Maurice, Billy, Don and Kenneth and sister Francis, he also faced the death of five grandchildren, Donald, Shawn, Cassie, Nathan and Zachery.

I’ve never walked down Life’s Highway with a better person. G.L. “Red” Garrett, 79, passed away March 30. Services were at Claybar Funeral Home Friday, April 2. He exemplified everything good and saw goodness in everyone. We were indeed fortunate to have known him and ride this trail of life with him.