Sheriff going out in blaze of cars 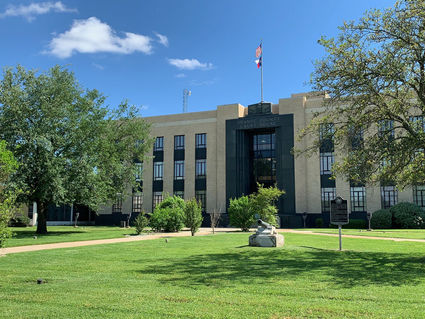 Money recovered and money received from the sale of seized property assets in drug interdictions is shared by federal, state and local agencies. That money can be used to purchase crime-fighting equipment.

But county commissioners are required to OK all purchases made by the Sheriff from federal forfeitures funds.

“It doesn’t hurt my feelings to be buying vehicles out of forfeited funds,” County Judge John Gothia said, noting that wasn’t part of the county budget which is largely funded by taxpayers.

Merritt, who opted not to run for a fourth term in office this year, will retire by the end of 2020.

“I did contact the new sheriff-elect [Mooney] to let him know what we’re doing and he’s totally in line with this,” Merritt said.

The sheriff also was approved for a $2,500 line-item transfer (moving funds from one line on his county-approved budget to another) to buy more cleaning supplies to deal with the COVID-19 pandemic.

He also moved $25,000 in another line-item transfer to help pay for prisoner transport expenses that continue despite the shutdown of many activities.

Merritt won another unanimous vote of the four commissioners and Gothia to apply for a Port Security Grant to pay $225,000 toward a $300,000 Lenco BearCat Armored Personnel Carrier.

The sheriff said the APC is capable of Chemical, Biological, Radiological, Nuclear and Explosion response and rescue operation to “increase and sustain a multi-layer protection plan for the Ports of Orange, Beaumont and Port Arthur.”

He told commissioners they had signed off on the same grant application in 2017 and his office had used it to replace an old patrol boat.

He said that if Orange County was awarded the grant for the APC, it would be available for use by 2022 and shared with other area law enforcement outfits in Jefferson and Hardin County in case of need.

“They have an old one in Beaumont,” Merritt said. “If we’re lucky enough to get one, it will be stationed here in Orange County and available to all counties.

Tuesday’s meeting was the second one held under the county’s social distancing policy that limits meetings to no more than 10 people. This time, Michelle Tubbleville, county special projects manager, livestreamed it on Facebook Live.

Last week’s meeting was held on Monday March 23, in order to extend the county disaster declaration that was to expire that night.

The county voted recently to hold meetings twice a month. Tuesday they voted that both monthly meetings in August and September be classified as “regular sessions” because a new change in state law requires votes affecting the next year’s budget take place in regular sessions.

Previously, only the second Tuesday of each month was considered a “regular session” and other sessions were tagged “special sessions.”