Photo: Wesley Dishon says his family’s High Tides restaurant on Cow Bayou is staying busy with carryout orders of food and drinks during a ban on in-store dining caused by the coronavirus. He said he’s considering adding on to the double-decker eatery that opened about a month ago.

Innovation and adaptation are the marching orders of the “new normal” in 2020.

A couple of Orange County restaurants are making them work, even with restaurants being closed to all but takeout dining by government orders designed to slow the spread of the COVID-19 pandemic.

The brand-spanking-new High Tides restaurant in Bridge City has not laid off any of its 77 employees and owner Wesley Dishon is talking about adding on to his double-decker dockside eatery.

The Boardwalk Grille, a couple of years into its startup on Fifth Street in downtown Orange, has extended its days and hours of operation to 11 a.m. to 8 p.m. Tuesday through Saturday and is meeting the demand for to-go dining and deliveries.

“Honestly, it’s hit or miss,” owner Lacey Lemoine said. “Every day is different. You kind of roll with it.”

High Tides was open for nine days at the foot of the Texas 87 Cow Bayou bridge before local restaurants were told to close their dining.

“That first week after the Grand Opening, we got beat up pretty badly,” owner Wesley Dishon said, meaning his staff was nearly overwhelmed by the crowds.

“Even with 77 employees, we were swamped. We were probably pushing 250 people.”

Even with the switch to carry-out dining, he said, “we’re exceeding our expectations, so far.

“We’re actually doing very well. We’re going through a lot of crawfish. A lot of people are calling orders in. A lot of booze is being sold to go.

“We’ve been very, very busy. A lot of boat traffic, too.”

Like High Tides, Boardwalk Grille has been doing a booming business in crawfish.

On Saturdays, that’s all that chef Jake Lemoine prepares.

On the other days, the restaurant has launched a new menu with items both from its prior lunch and dinner menus.

The Lemoines’ location on Fifth Street is expected to be the predecessor of a large riverfront restaurant on the Sabine River riverfront boardwalk across the street. Weather delays and red tape have delayed construction.

But the Boardwalk Grille has enjoyed a steady flow of diners in the meantime, joining the Old Orange Café as downtown eateries.

“We’ve adapted on our menu and added steaks,” Lacey Lemoine said, talking about the list of changes made, changes that include the Gubers delivery service.

“At this point, pretty much all we can do is adapt to what we can do,” she said. “We’re OK right now, as long as people support us.”

Dishon said his restaurant’s employees were handling deliveries and they are delivering to essential workers at plants, city offices and law enforcement offices, among others. 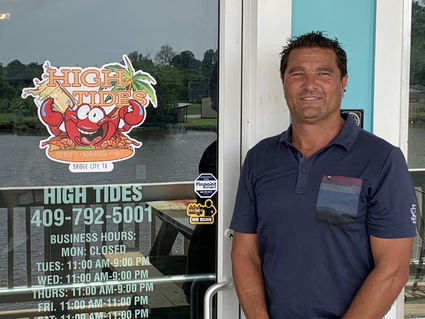 “I think we’re delivering within about 10 or 12 miles and we’re doing it ourselves,” he said. “We just figured we’d keep our people busy.”

He’s hoping the health crisis will abate soon and his restaurant can become the riverside attraction he envisioned it would become.

“We’ve got a couple of boat poker runs set up for the next couple of weeks,” he said, “so hopefully we can get back up and running. We had a couple of six- and eight-boat runs that came through last week.

“They picked up their food and sat out there [on their boats] and ate. Pretty interesting.”