OC breaks down its COVID-19 results 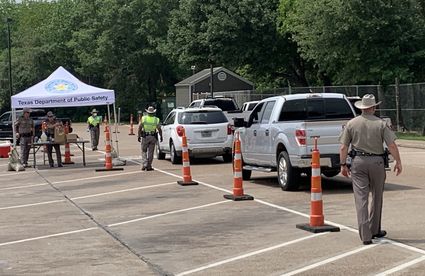 Photo: Texas state troopers question motorists who enter the state from Louisiana Tuesday at the Welcome Center on the Texas side of the Sabine River.

Orange County’s Office of Emergency Management debuted on its Facebook page Tuesday a new grid to better pinpoint areas of testing and confirmed cases of COVID-19.

Among the many squabbles on the ever-shifting battlefield that has been local, state and federal decrees regarding the new coronavirus has been one of geographics.

There are varying readings of the Heath Insurance Portability and Accountability Act, which regulates the privacy of individuals’ medical information.

Exactly where does the public’s right to know bump into a person’s right to privacy?

So far, public health agencies have erred on the side of caution, meaning Southeast Texans have received only general geographic information about people who been tested and confirmed to have COVID-19.

That has led to a lot of questions.

Tuesday, 11 geographic areas inside the county were listed.

Tuesday’s list includes 31 positive tests for the county, including seven in Vidor, six in “Orange area,” four each in “Orangefield area” and “Pine Forest area,” two each in “Bridge City area,” “Little Cypress area” and “Mauriceville area” and one each in “Forest Heights area,” “Lakeview area,” “McLewis area” and West Orange.

“We’re trying to break it down as tight as possible,” Gothia said. “Say it says Vidor has 11 cases [which the SETREO did Monday], but they may not all be in the Vidor city limits.”

The problem, Gothia said, was that one public information office was attempting to deal with reports from the six member counties – Orange, Jefferson, Hardin, Jasper, Newton and Tyler – and several health agencies per county.

The new Orange County OEM Facebook graphic has each of the 13 areas (including Pinehurst and Rose City, both of which show zero confirmed cases) broken down into six other categories – Positive Tests, Negative Tests, Pending Tests, Active Cases, Recovered Cases, Deceased.

The other totals for the county are 93 negative cases, 72 pending, 30 active cases, 1 case recovered.

County offices have all been closed since last weekend, when it was discovered that an employee of the Sheriff’s Office had tested positive.

“All our buildings are down until we know for sure they have been treated and decontaminated,” Gothia said. “When we open back up with the same skeleton crews we had working last week, we’ll make some changes on how county personnel moves around.”

The judge said employees will not be allowed to go freely between one county building and others.

“Unless they absolutely have to go to another building,” he said.

The Texas Department of Public Safety state troopers were checking on drivers of passenger cars and small work trucks at the Interstate 10 travel rest station at the state line but most were allowed through with a word and a wave.

Monday, county commissioners held an emergency meeting at the Orange County Convention and Expo Center and voted on new rules differentiating between a public health disaster such as the current one and a weather-related disaster like past hurricanes and tropical storms.

“We’re going to pay the people who don’t have a choice but work,” Gothia said of disaster pay.