The information posted on the OCOEM Facebook page showed the county's 39 confirmed cases were split down the middle by gender, with 20 being women, 19 men.

As has been reported elsewhere and feared all along since the new coronavirus entered the United States in January, those testing positive tend to be older.

Twenty of the 39 Orange County cases occurred in patients 51 or more years of age, with only four of the cases being found in citizens under 30.

According to OC Emergency Management, there were no COVID-19 deaths in the county through Friday.

John Hopkins University's web-based dashboard showed 17 million confirmed cases and 107,000 deaths worldwide as of Saturday, April 11. It also showed that the United States has 519,000 confirmed cases of COVID-19, with more than 20,000 deaths.

County Judge John Gothia said Saturday that Friday, April 10, was the first time Orange County had been authorized to publish the age and gender statistics, as the conflict between the public's right to know and and people's right to keep their health information private is being daily debated.

Gothia said he and other public officials are fielding a constant barrage of calls and questions by citizens wanting to know more details about who is getting COVID-19.

He said people are asking so they can determine how much to be concerned and what amount of precautions are right to take. Gothia said people would be debating for years whether government leaders went too far or not far enough in trying to limit the spread. 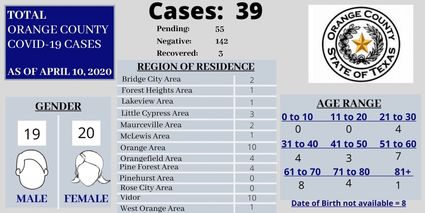 "All we'll know for sure is what happened when we did it this way," he said.

The April 10 numbers for Orange County showed 10 confirmed cases each in Orange and Vidor.

The county began within the last week listing results for 13 geographic areas in the county. As of Tuesday, April 7, 31 cases were confirmed, seven in Vidor, six in "Orange area," so those two locations are listed as homes to seven of the eight newly confirmed cases.