Curve slopes down for BC couple 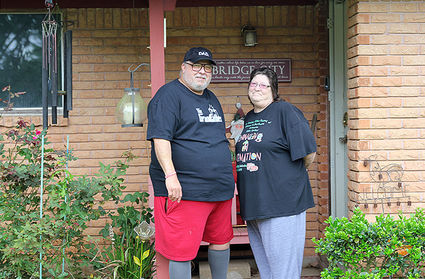 Photo: Phillip and Janice Todora of Bridge City have been quarantined and are recovering at their home since late March after learning they both tested positive for the COVID-19 coronavirus.

Phillip Todora, the first confirmed COVID-19 patient in Bridge City, has made no secret of his identity.

‚ÄúThirty minutes after my doctor called me with the test results, my daughter‚Äôs boss told her she had to go home because somebody who lived on her street had COVID-19.

‚ÄúThat‚Äôs how she found out. How did the people at her job find out? This is Bridge City.‚Äù

Todora said basically the same thing on Facebook shortly after he shared the news with his family.

‚ÄúRight after my daughter was sent home, my neighbor called and asked, ‚ÄòIs it true?‚Äô‚Äù

But in the Todora household, that was the just the first shoe to drop.

His wife, Janice, found out the next day she had tested positive.

And Phillip jokes he got COVID-19 from his wife.

The couple was smiling Easter Sunday, confident they are about to be moved over to the ‚Äúrecovered‚Äù column on the county‚Äôs daily release of statistics.

‚ÄúWe‚Äôre just waiting on the procedure for the release,‚Äù Phillip Todora said by telephone. ‚ÄúI‚Äôm trying to shake off this nagging cough, but she‚Äôs doing fine.‚Äù

But husband and wife aren‚Äôt the half of it in the Todora household.

The couple has three adult children who live with them. They, too, have had to be quarantined since Phillip got his test results from Dr. Calvin Parker March 30.

Orange County confirmed its 47th case of COVID-19 Tuesday evening, with 13 each listed in the Orange area and Vidor. A total of 362 people in the county have been tested with results still pending from 100 of those tests.

‚ÄúWe‚Äôre quarantined until we‚Äôre released,‚Äù Todora said of he and his wife. ‚ÄúAnd once the last one of us is released, the kids have to quarantine for 14 more days.‚Äù

It‚Äôs been a rough few weeks for the family, but they seem to have made the best of it, according to Phillip‚Äôs social media feed.

Friends are always checking in on the longtime residents. Phillip finds the funniest things to post. And the youngsters even threw a Facetime Bingo game for Janice, joining in from their corners of the house.

But it hasn‚Äôt always been laughs.

Phillip, in his early 60s with a history of health problems (heart attack in 2010, COPD despite never having smoked, high blood pressure and diabetes), was initially diagnosed with pneumonia in his right lung and bronchitis in his left lung back in March‚Äôs last full week, he said.

He was given a Zithromax Z-pack to fight infection in his lungs and a shot of antibiotics and sent home.

A week or so later, while working from home for his socially distancing company.

‚ÄúI thought I was having another heart attack,‚Äù he recalled. ‚ÄúAs the day wore on, it seemed like the world was getting dark.

‚ÄúIt was like somebody threw a weighted cloak on me, like an elephant was standing on my chest on top of a bed of nails.

After a steroids injection and a half-day at the hospital, he was released.

That‚Äôs the first time, Phillip Todora went to the hospital.

It was at that time Janice Todora thought she was suffering with the flu.

‚ÄúShe experienced coughing and nausea,‚Äù Phillip said. ‚ÄúShe was tested for the flu initially. When it came back negative, Dr. Palmer sent her to Legacy in Beaumont.‚Äù

‚ÄúThey sent her test to the West Coast and mine was sent to the Northeast the next day,‚Äù Phillip said. ‚ÄúMy test came back in two days. Her took four.

‚ÄúThose two confirmed cases that are showing up in Bridge City, that‚Äôs her and me.‚Äù

While Phillip Todora was tested and confirmed to have COVID-19 in late March, his problems didn‚Äôt stop there.

He said three days after receiving his test results, he landed back in the hospital, this time staying overnight.

‚ÄúI was feeling real bad. Dr. Palmer said, ‚ÄòYou need to go into the hospital.‚Äô That time, they were waiting on me.‚Äù

At the hospital, he was administered hydroxychloroquine, the anti-malaria drug boosted by President Donald Trump.

Todora says his wife ‚Äúhad a persistent cough for a week or so. Then it went away. She kind of shook off all the symptoms.‚Äù

The couple are required to fill out a chart twice a day recording their temperature and any coughing, aching or fatigue.

‚ÄúWhen Dr. Palmer called me up and told me I tested positive, that kind of rocked my world,‚Äù Phillip Todora said.