Shortly after Phyl and I got married, 65 years ago last December, we bought our first home in Bridge City on Shady Drive. My father Clay was partly responsible for us starting out our lives together in Bridge City. He really believed in the area after the Rainbow Bridge was completed in 1937 and the swing bridge linked Texas 87.

He had pioneered the business world here while folks were still commuting to Port Arthur by ferry. On that Ferry Road, now Lake Street, he built the Silver Slipper Supper Club. That was in the mid-1920s when prohibition was in full swing. Ironically, Phyl’s parents were caretakers there in the 1930s. The building stood at the same location and probably was Bridge City’s oldest existing building until hit by the winds of Hurricane Rita and waters of Ike.

In 1946, after the war’s end, dad put in the Midway Motel on the new highway. The name had changed but the motel was in continuous operation through the years and was the town’s only motel until Hurricane Ike also destroyed it.

Had we known the mosquito problem, we probably wouldn’t have picked this location. When Phyl hung things on the clothesline the Skeeters nearly carried her off. No automatic washer or dryer in those days and before mosquito control and “Off” had been thought of.

The town, which was not a city yet even though it was called that, was sparsely populated. The youngsters rode their bikes down Texas Ave; trees were not as plentiful and the city still had areas that looked like a prairie.

The town’s previous name had been Prairie View. The famous Buccaneer Restaurant was located on the right side, near Cow Bayou, coming into Bridge City from Orange. Joe Bailey had his joint across the highway. The Lafittes owned the small Ranch Café, near our place on the south end of town, towards Port Arthur. They made a great 15-cent hamburger. We would splurge once a week and buy three and split the odd one.

Bridge City was fairly clannish at the time. People moved here to get away from city taxes and have a spot big enough to raise a garden and have a couple of cows. Most worked at Texaco or Gulf refineries.

I lived here 20 years before I wasn’t considered an outsider. Even though we went away for a short period, we always maintained a house in Bridge City. The old house on Shady burned down after we sold it, and through the years, we are still only in our second home. It’s been home for 47 years and until the wind driven surge of Hurricane Ike destroyed everything, we still hadn’t unpacked boxes from Shady Drive.

Bridge City has always been considered a bedroom community, with people usually working in Port Arthur, Orange or Beaumont.

Before Ike it had become a boom-town and folks were discovering our secret of the good life and coming in bunches to enjoy the laid-back atmosphere.

For me, over much of the years, it was a bedroom community; despite owning a business here my days were all spent in Orange.

That’s where my friends were, primarily where I earned a living.

I was much closer to the people and happenings of Orange and the greatest friends of my life were made there.

I still have strong bonds to Orange and I’m saddened by the loss of so many of the fine people we knew over the years.

I could write volumes about those interesting, salt-of-the-earth folks who have gone before us.

I really loved those guys and gals.

Sixty years ago, Bridge City didn’t have organized youth sports as we know it today.

Youngsters would play baseball at a makeshift diamond behind Hatton School.

Sometime around 1963, we started building three baseball fields off of Sunset Street, in the middle of a marsh.

I was just a helper while my best Republican friend, craftsman Kenneth Young and a handful of others like Coy Morgan, Bill Powers and many more did the real work of welding, building, etc.

For a dozen years I coached youth baseball and football.

My background was in both sports so I was not only able to teach my knowledge to the boys (no girls), but it also was an extension of my own baseball youth.

Some of the boys were needy kids.

I bought them gloves, picked them up for practice and often brought them home for Phyl to feed.

Some 30 years ago my partners and I were able to make available property that is now the home of the outstanding BC Little League complex.

A great group of men have done a wonderful job building one of the finest Little League facilities in the area.

The Little League Park is now enjoyed and used for baseball and also for girl’s softball.

On the same property we owned, with the help of $148,000 raised by citizen pledges, the Community Center, built by union craftsmen who donated their time and talent, was erected.

And yes, Phyl and I were involved in youth baseball through our grandsons, Garrett, Sean and Collin, who played the game.

I’m proud of the part I was blessed enough to have played.

All of our children and grandchildren, except one, have attended Bridge City schools, getting their early learning at either Hatton or Sims Elementary.

The two schools unfortunately also fell victim to Ike but were replaced by a new, larger, more modern building that houses all elementary students.

We have been fortunate to have our children and grandchildren so near, with the exception of granddaughter Jenna, who was raised and lives in Massachusetts with her husband Robby and our four great-grandchildren, Nate, who will graduate this year and is planning a career in the Air Force, Delilah, Willow and baby Chase.

These children will never know of the roots that were planted so many years ago by their great-great-grandfather, in a community that we call home.

When the other youngsters go off, they will take some memories of the life they lived in this great community.

Back in our early years in Bridge City, Phyl always looked forward to Tuesday and the Penny Record.

She would sit on the front steps on Shady and read every word in it, including the classified ads.

Through the past 60 years, the local newspaper has been a part of the life of everyone raised or who moved here.

In 1965-66, during Bridge City’s run at the state football championship, the paper came into its own.

In the years to follow, as Steve Worster, gained notoriety around the state and nation, thanks to his hometown newspaper, everyone knew he was from Bridge City, Texas. 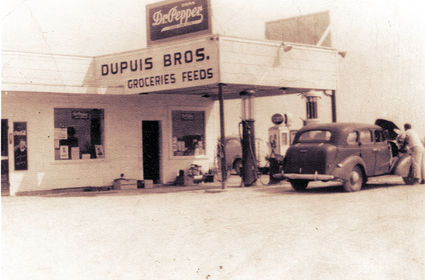 The newspaper has had only four publishers since its inception and has always been owned by hometown folks. It has grown and still is considered by the Bridge City and Orangefield folks as their hometown paper. The County Record was born as a sister paper and has enjoyed great acceptance in the greater Orange trade area.

Bridge City today is like one big family, neighbor helping neighbor and enjoying the God-given assets that attract others to make it their home. I look back over the years Down Life’s Highway, and I’m thankful that the Lord chose to put the saltwater crabs, mosquitoes and our family down in this little part of the earth. It’s a great place to spend a lifetime.