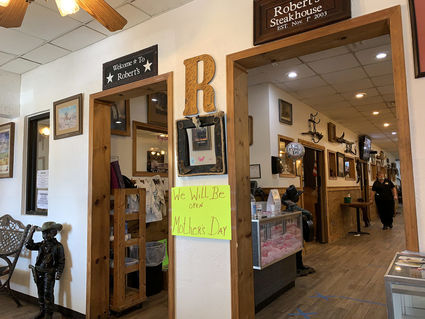 Mother’s Day is normally one of the busiest days of the year for Robert’s Meat Market and Steakhouse, Orange’s biggest restaurant.

But this year? Not so much.

“I don’t expect it to be good this year,” owner Robert Ramirez said of Sunday’s family get-together event.

“We can only seat about 60 and then stop. When some people come out, some more will get in.”

Prior to the outbreak of coronavirus and the Covid-19 illness it carries, Robert’s could squeeze in as many as 400 diners at a time.

Ramirez was able to reopen his restaurant last Friday, on the first day of what Texas Gov. Greg Abbott called the Phase 1 reopening of the state’s economy from a Stay-at-Home order.

But restaurants, limited to only selling carryout orders before May 1, are restricted to 25% indoor occupancy with tables no closer than six feet apart.

That’s through May 17, according to his April 27 announcement.

Although Abbott announced Tuesday (May 5) that he is allowing barbershops and hair and nail salons to reopen, under specific guidelines, Friday, he left May 18 as the opening date for gyms and exercise studios.

A few days into reopening his indoor dining rooms, Ramirez said business “has been slow, but it’s picking up day by day.

“People are still nervous about going out,” he said.

Ramirez said he had 54 employees on his payroll before Covid-19 made its way to the U.S. He now has 10 working per day, because that’s all he needs.

He expects that when Phase 2 of the state’s reopening happens on May 18 and he can seat up to 50% capacity, “that will make a big difference.”

County Judge John Gothia said many of the smaller- to medium-sized restaurants are delaying their reopenings for indoor dining.

“They say they’re not going to reopen their interiors until they allow 50%,” Gothia said. “Most everybody says they’ve been doing so good with their takeout business.”

Gothia said he was excited to hear the governor say Tuesday that barbers and salons could reopen Friday.

“It didn’t make any sense that they couldn’t reopen with the same guidelines as restaurants and stores,” the judge said. “I wrote a lot of letters and texts to the governor to do something [to reopen haircutters] and probably across the state people were writing letters like I was.”

Ramirez says while he looks forward to cooking for more and more people, many of his employees say they don’t want to come back to work now. The combination of federal stimulus checks and new higher unemployment checks allow them to make more unemployed than when working.

“Until July, they can draw their money,” Ramirez said.

“Right now, it’s not a problem because it’s slow, but if we get busy and call them, then it’s a problem.”

Ramirez said the situation in 2020 is the worst he’s had to tackle in 20 years in business.

“It’s a lot worse than the flood,” he said of Hurricane Harvey, which closed down Robert’s for six weeks. “I had insurance for that.”

The closure of beef, chicken and pork processing plants because of workers testing positive for Covid-19 is a big worry for the restaurant owner.

“The price of boneless chicken breasts has gone up 40% and I can’t hardly find any,” Ramirez said. “So far, there’s no problem with beef [availability]. We’re paying the price, but we’ve got it.”