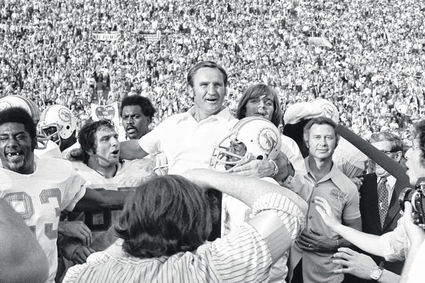 Here it is May already and not much has changed as a result of the Coronavirus pandemic that made its ugly presence known a couple of months ago.

Many states and cities in the United States optimistically relaxed some of their stringent rules—perhaps prematurely—while the world’s athletes sit and wonder when they will be doing their thing again without any hazard to their health.

The National Football League just concluded its annual draft of the nation’s top collegiate football players who are eager to learn their new team’s system of play in hopes of landing a huge payday if and when the 2020 NFL season begins.

These draftees or rookies-to-be will all have their backs against the wall with their respective teams because it doesn’t look like there will even be a rookie minicamp this year where these NFL hopefuls get a cram course from their respective coaching staffs.

With no Organized Training Camps in sight, these young men who are stepping up to the next level in their football careers will need to get very creative about setting up their football positions by themselves.

As it stands right now, the NFL is going through this offseason with no practices, in-person meetings or the usual bonding that happens each spring, as an Associated Press article in Saturday’s editions pointed out, comparing the present NFL situation to that of 2011 when team owners locked out the players until July.

However, the article points out that in Week 1 of the 2011 season, more rookies started for their respective teams than in any previous year since the AFL-NFL merger. There were 47 rookies starting Week 1 games back then which was only surpassed in 2012 and last season.

The 2020 NFL schedule and the exhibition season is supposed to be released sometime this week. But because of the coronavirus outbreak worldwide, those four games schedule to be played in London and one in Mexico City will most likely be postponed and played at the home team’s stadium.

College football players are encountering the same sort of dilemma, especially those hefty linemen who usually spend this time in spring football practice. Very few teams were smart enough to hold spring practice in last February and early March before the pandemic halted all college sports.

An AP article on Monday stated that these 300-plus pounders who like to eat a hind quarter and a gallon of ice cream for supper, are having a big problem laying off the calories and eating healthy this spring. If they don’t, whenever preseason training begins, it will be murderous for these Goliaths.

College football players who are not living at home during this pandemic are being assisted by their schools with care packages, grocery tips, recipes and even cooking demonstrations on social media, the article pointed out. Nutritionists or dietitians at schools have consulted with the athletes from afar.

The big challenge for college coaching staffs is keeping athletes who are working out on their own on track when it comes to adding strength or avoiding unwanted pounds for as long as whenever they can return to their respective campuses or whether they will even play a schedule this fall.

Major league baseball has already lost five weeks of its 2020 season and it appears the late start is nowhere in sight at this writing. The players, coaches and trainers are being compensated, but that reportedly will halt at then end of this month.

Umpires are guaranteed 50 per cent of their salaries for May, but would be paid nothing after that if no games are played this year.

According to the AP, umpires generally make between $150,000 and $450,000. They already have been paid from January through April.

If the games are played at the spring training sites in Florida and Arizona, there aren’t the facilities to use replay reviews and the umpires’ decisions will have to be final.

As far as the National Basketball Association is concerned, the 2019-2020 season is over, although NBA Commissioner Adam Silver is still committed to trying to salvage the season, which might not be realistic or even advisable.

However, there is optimism among executives that the league will figure out something to save some portion of the season.

KWICKIES…The world of pro football was saddened Monday by the death of Don Shula, the winningest head coach in NFL history. Shula won Super Bowls in 1972 and 1973, with the ’72 team being the only one to go through the regular season, playoffs and Super Bowl undefeated, Shula was 90 years old and won 347 games during his illustrious career.

Kansas City Chiefs’ offensive lineman Laurent Duvernay-Tardif, is the only active NFL player to earn a medical degree. He spent each offseason at McGill University in Canada and asked the Canadian Health Ministry early in the coronavirus outbreak how he could help. He sprung into action when it became clear there would be shortage in trained medical professionals.

The Dallas Cowboys made a surprising move last weekend when they signed former Cincinnati Bengals’ quarterback Andy Dalton to a one-year contract that could earn him as much as $7 million. Dak Prescott shouldn’t have to worry about losing his starting job because Dalton was picked up as Prescott’s backup.

It’s almost like a quarterback’s musical chairs waiting game as Kansas City’s Super Bowl MVP Patrick Mahomes, Dallas Cowboys Dak Prescott and Houston Texans’ Deshaun Watson are all due to sign huge contract extensions sometime this season. Prescott wants to see the value of Mahomes new contract before signing his new pact while Watson wants to sees the value of Prescott’s contract. All three contract extensions are expected to be humongous.

JUST BETWEEN US…Buna native Charles Breithaupt, who is the executive director of the University Interscholastic League, was given temporary expanded authority on issues related to the COVID-19 pandemic in a resolution passed Friday. The move could lead to relaxed restrictions on summer conditioning which Breithaupt said the league hopes student-athletes and coaches can start soon unless professional sports leagues and other entities remain suspended, according to an article appearing last weekend in the Houston Chronicle. The UIL also passed a resolution stating a student who was cleared in a physical examination in the 2019-20 school year can continue to participate in 2020-2021 unless there is an indication further medical evaluation is required.