Not a Bad Alternative 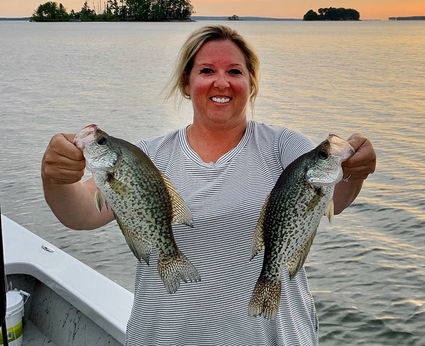 While I certainly won't mention any names as they don't need some fool publishing a list of temporarily unoccupied residences, it is amazing the number of folks that are now spending more time at their lake homes than their permanent residences. They just won't come home and I don't

I know of one couple that has spent more time at their camp on T-Bend over the past two months than they did in the past ten years.Robert and Beverly Connor left home as well, but took a slightly different approach.

"Rather than leave the house vacant, when our daughter's college shut down, we suggested that she and her roommate move into our house and it has worked out for all of us," said Robert. "At least I hope so as we haven't seen the house in the last three weeks.I can only hope she is

I cannot recall receiving so many texts and emails concerning the fishing status on Toledo Bend as well as Rayburn on a daily basis. That only indicates that not only are a lot more folks fishing than ever before, but they are catching as well.

This morning I opened four texts and thirteen emails and I had nine pictures of fish. White perch have stolen the show, but the bass catching has not been bad either. Due to circumstances out of anyone's control, Gary Stelly virtually missed the spawn, but he has certainly made up for

it over the past couple of weeks.

He has had an opportunity to fish more this year than ever before and his skills continue to improve, but he attributes his more consistent catching to more cooperative bass."I can't remember the average size of the bass we are catching being this solid this soon following the spawn."

The numbers of double digit fish reported was down considerably during the spawn, but several different patterns are now producing not only a few of those larger fish, but great numbers as well. "I am usually crappie fishing and waiting on the bream to start this time of the year," said Clayton Fears, "but I am still drifting 8 to 12 feet of water with a Carolina rig and consistently going through limits of bass most every afternoon. My son-in-law caught his first double digit fish

night before last on a buzz bait."

While Stelly continues to get it done with either a square bill or Wacky worm in less than eight feet of water, lots of other anglers are taking advantage of a much deeper bite. "We have been drop-shotting a finesse worm in 20 to 24 feet of water over the past two weeks and have caught

bass, wind or no wind, every day," reported Preston Katz.

"We get no pressure because most people think we are crappie fishing over a brush pile and just ride on by," he added. "We are finding the best schools of bass holding on the south side of deep points and it hasn't mattered if there is grass or not."

And, while on the topic of "crappie fishing", I don't think it can get better than it is right now for the brush pile fishermen.I think the T-Bend anglers are catching a little better average fish than their

Rayburn counterparts, but no one over there is complaining!

The two keys to making the technique pay off are building and setting a quality pile of brush and learning how to fish it once it has attracted fish. Lamar Belcher has taken that challenge seriously lately and says he learns a little more every trip.

"Even when you see the fish on your electronics it doesn't mean you are going to catch them if you don't get everything right," said Belcher. "Last weekend we did nothing more than set our slip cork a foot or so shallower and it was game on."

At least it was game on for his wife, Lenzi. "We caught about fifty fish and she caught all but four of them, but I was taking really good care of her," he was quick to point out.

That is Lamar's version of what took place. For a more accurate account it might require speaking with the affable owner/director of Kidz World Learning Center in Bridge City. As a matter of fact, she may well be sharing her fish-catching technique with those kids today!