Start of MLB Season Still Has Many "Ifs" 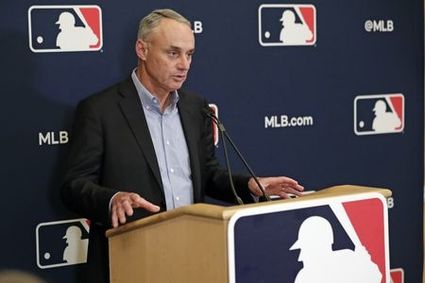 Major League Baseball Commissioner Rob Manfred made a last-ditch effort to save the 2020 MLB season early this week by presenting a blueprint during a conference call Monday with the league's 30 owners, according to an article that appeared in Monday's edition of the Houston Chronicle.

A return to play proposal would be given to the Players Association as early as yesterday, despite the situation still being characterized as extremely fluid, with several hurdles to overcome.

The fact that the players approve the proposal doesn't mean anything will happen until it receives the blessing from local governments and medical experts the league has been in constant consultation with.

The article stated that the plan presented to the owners on Monday is expected to contain a season of 82 games that begins in early July. MLB's goal is to play as many games as possible in empty home ball parks.

Even if the July target date is approved, some form of a second spring training will be required either at the home facilities or in Florida and Arizona. Active rosters would have to be extended beyond the agreed-upon 26 players to perhaps as many as 30.

And to reduce the normal travel the plan is to regionalize scheduling which would allow teams to play exclusively against divisional opponents and against geographic counterparts in the other league.

Our Houston Astros could face teams only in the American League West Division and the National League West. The post-season playoffs would expand from 10 to 14 teams.

What to do if a player or staff member tests positive upon the season's resumption hasn't been decided which is one of the largest roadblocks in MLB's return.

Back on March 26, an agreement between MLB and the Players Association, the league promised not to resume its season until there were no bans on mass gatherings, medical experts determined there were no health risks for players, team personnel or ballpark staff and travel restrictions were lifted in the United States and Canada.

It must be pointed out that all nonessential travel between the U.S. and Canada still is limited through May 21.

The March agreement did offer flexibility for the league and union to discuss playing to empty stadiums, which now is almost a certainty, according to the article. But this scenario could offer the most discontent between MLB and the players union.

The players had already accepted a $170 million lump sum advanced payment through May 31. The March agreement stated that if a 2020 season occurred, players would receive their prorated salaries.

However, the article points out that the league's plan to resume the season includes another proposed pay cut for players due to the likelihood of empty stadiums because gate receipts make up a good portion of a team's total revenue.

Last season the Astros generated $180 million of their $420 million total revenue from their gate receipts.

There's a good chance MLB may propose a revenue-sharing system between the league and the players, but union chief Tony Clark seemed unwilling to budge from the terms of March's agreement, saying in a statement last month "that negotiation if over."

So, no matter what quotes we've read or heard to not worry about the money, it seems like the money situation will determine whether there's a 2020 baseball season or not!!

KWICKIES...Hall of Fame basketball player Shaquille O'Neal thinks the NBA should call off the rest of the season so everybody can get healthy to "come back next year. Any team that wins this year, there's an asterisk. They're not going to get the respect."

New England Patriots' owner Robert Kraft is auctioning off his Super Bowl ring to All in Challenge. He high bidder also will get a visit from Kraft.

NFL coach and former All-Pro Herman Edwards would like the NCAA to have a season this fall but warns, "If it's not safe for students to return to school then it certainly is not safe for the football players, either."

ESPN announced last weekend that Joe Tessitore and Booger McFarland are out as the network's "Monday Night Football" announcement team with the replacements likely to be filled internally. Steve Levy is most likely to replace Tessitore on play-by-play while Dan Orlovsky, Louis Riddick and Brian Griese the top candidates for the analyst job.

JUST BETWEEN US...Last week our grandson Logan Smith informed Major League Baseball to take his name off the list of college players eligible for the upcoming draft after it was announced there will be only five rounds. A few days later it was announced at West Point that he was named Army's Most Valuable Player for the abbreviated 2020 season. "Logan Smith, one of the best true leaders we have had in our program, is our team's MVP this year. I don't know what we would have done without him on the mound. He is one of the most improved players I have ever coached. Logan has overcome adversity and come out better on the other side every time," Head Coach Jim Foster said in his announcement. Logan will receive his commission virtually May 23 and finished his final exams today.