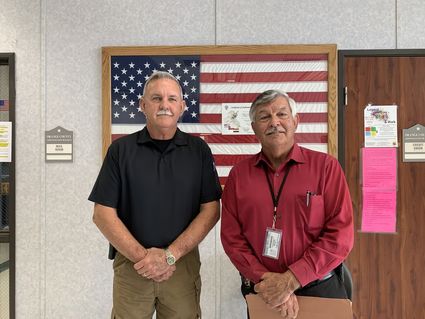 But as Tarver exited one door, the county added 20 years of law enforcement experience through a different door, with Tuesday's swearing in of Precinct 2 Constable Jeremiah Gunter.

And Gunter said Tuesday marked only a step along his intended path.

"I'm looking to be Sheriff of Orange County one day and this is going to help me get there," he said.

Two decades apart, both Tarver and Gunter began their law enforcement careers as jailers in Orange County. Tarver points out, however, that the jailhouse he started his career in doesn't exist anymore.

Sheriff Keith Merritt said that Tarver was the 16th member of his department to retire this year, on the recent heels of Jail Capt. Dennis Marlow and Detective Joel Stinnett, each of whom had served more than 27 years with the S.O.

While Merritt said he would miss working with Tarver, whom he first met when Merritt began his law enforcement career in 1979, also as an Orange County jailer, he said he planned to serve through the end of his final term.

Merritt announced after winning election to his third four-year term in 2016 that it would be his last. Constable Lane Mooney won the Republican primary in March and will take office Jan. 1, 2021.

Tarver's official final day is Friday, but his plans were to end his duties Wednesday, May 27.

But between each Sheriff, the Orangefield High grad worked for city police departments in Bridge City and West Orange. He spent more than half his law enforcement career – 26 years – in policing.

He was a patrolman at Bridge City in his first nine-year stint there. He returned to the Sheriff's Office as Chief Deputy to Sheriff James Wade. After that, he served eight and a half years as Bridge City's police chief.

Then he returned to downtown Orange as Chief Deputy to Sheriff Mike White and retired at age 50. But it didn't take.

He spent 10 years as a patrolman for the City of West Orange.

Finally, Merritt invited him back to the Sheriff's Office in 2015, to be his Chief Deputy.

"I told Sheriff Merritt when I came back that I'd give him two years, but during that time I told him I'd like to stay with him until he left. I know it's time to go.

Asked to recall his most memorable case or caper, the retiring Deputy Chief demurred.

"There's really not one thing that I can put my finger on," he said.

"I have spent the majority of my life serving the people of Orange County and I have been called to [crime] scenes on holidays and had to leave my family.

"I felt like it's my turn to take care of my family now. Do for my wife, children and grandchildren. And also do for me."

Tarver and wife Dena have been married for nearly 30 years. He has four sons – Jeremy, Brandon, Eric and Chris – and he and Dena share 15 grandchildren.

Gunter was sworn in Tuesday before the bi-weekly Commissioners' Court meeting at the County Admin Building downtown.

Judge Chad Jenkins, Justice of the Peace for Precinct 2, did the honors.

"You'd better get ready to get busy," Jenkins said.

Gunter explained that the COVID-19 lockdown had created a backlog of paperwork for the new constable to serve.

"The civil side has been backed up for two months now," he said.

Gunter was unopposed in the March 2020 Republican Primary and faced no challenger for November. Mark Jones, who had taken over the Precinct 2 Constable position after the sudden death of Constable David Cagle, resigned earlier this year.

Besides the Orange County Sheriff's Office, Gunter has served in the police departments of Silsbee and Lamar University.