Dog days of summer mean more options on the water 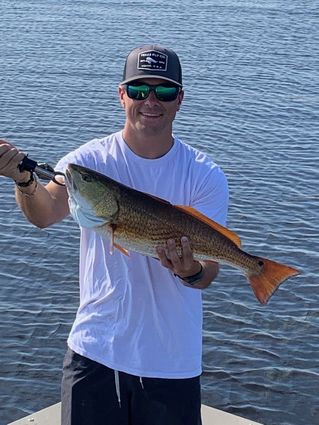 After weeks of constantly changing winds that have driven anglers crazy it seems that better days are officially here. The traditional summer programs are now actually fishable and anglers have more options than just hiding from the howling winds. Sabine and Calcasieu have now become much more fisherman friendly and it seems that not only has the weather begun to cooperate but the fish have also decided to join the party as well. The best thing about this time of the year is the endless possibility of patterns of which there is to chase fish, from the river to the gulf they all begin to work as summer takes hold and the weather gets as hot as the fishing.

Let’s start with the easiest program out there and that’s chasing school trout under the birds. This program has been much more predictable in the past several years and this summer is no different as gulls and terns alike continue to work over schools of fish towards the southern end of the lake. This program is exciting and can produce unbelievable numbers of fish when the conditions are right. Anglers scanning the horizon with binoculars are often rewarded with flocks of birds diving on the surface of the water chasing shrimp that have been pushed to the top by trout and redfish, a very welcome sight to say the least. There are however a few drawbacks to this program with the biggest being traffic, you can bet if the program is easy that you will have company and plenty of it so pack your patience because you will need it. The other drawback is the size of the fish; traditionally fish under the birds tend to run smaller so you may have to go through the numbers in order to catch some keepers. Now the flip side to that argument is on occasion the school of fish you encounter under the birds is a really good one, Sabine is famous for some of these schools being 3 to 5 pound trout but that is the exception to the rule.

Now another program that produces well during the summer would be chasing slicks. A slick is a shiny spot on the surface of the water that is made as trout and redfish feed, the slick can be seen and often smelled by those who know what they are looking for. The best way to see what one looks like is look around a crab trap that has just been baited, the shiny spots on the water look just like a real slick made by a fish. Now if you see a slick on the water the rule is the smaller the slick the fresher it is. Be sure to check the area and make sure the slick didn’t come from a crab trap, idle upwind or up current and begin fishing. By fishing slicks anglers can escape the crowds who are chasing birds and often catch better fish, especially redfish. Just recently I ran into some slicks in the mid lake area and found some really nice trout to 5 pounds as well as a big herd of redfish rooting around the bottom and stirring up a big mud boil. The fish hung around and we caught good trout on each drift through the area for quite awhile.

For many folks the thought of staying in the lake when the wind dies down is not an option as they head for the gulf or the beach. The “big water” is only kind to anglers on so many days so you have to take advantage of every opportunity. Light seas and calm surf mean clear green water gets closer to the shore and with this beautiful water comes all sorts of new players including jacks, Spanish mackerel, and tarpon. The light seas are custom made for the “mosquito fleet” and you can bet a dollar to doughnut that these folks will head for their favorite rig or wreck with a big smile on their face and they will return with some equally big fish stories as you never know what kind of fish will show up when hit the gulf.

After weeks of cursing the howling winds local fishermen will get the break they have so desperately begged for and that should last for quite some time as summer takes a strangle hold on the conditions. The calm winds will often be so still that a breath of wind is a welcome occurrence, especially when you want to drift. I for one won’t complain because I would gladly trade a little heat for the opportunity to fish basically anywhere instead of being pinned to the bank somewhere in the middle of the whitecaps