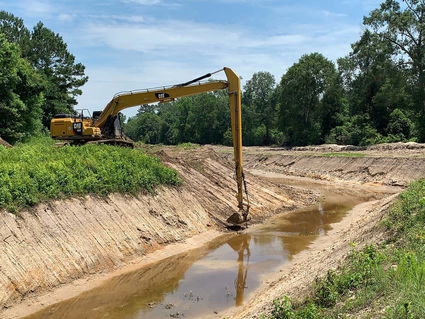 The coronavirus and the disease it carries, Covid-19, haven’t slowed down efforts to improve drainage in Orange County.

“Drainage is way better than it was a few years ago and they’re continuing to work on that,” said Joel Ardoin, emergency management coordinator for Orange County.

On May 14, a slow-moving thunderstorm dumped nearly 10 inches of wet stuff in a three-hour period on some neighborhoods in Orange County.

A handful of homes took on water.

“I’m not sure how many houses got water inside but a lot of citizens told me the same,” County Judge John Gothia said. “They said they could see lots of improvement in how fast the water got off of them.

“They said, ‘The water came up fast, but it went down fast.’”

The county’s top elected official said this week that he meets several times a week with the county’s mayors, the Orange County Drainage District and TxDOT.

“We’re looking at it from all areas,” Gothia said. “We don’t want to pull water off one part of the county just to flood someone else.”

The Drainage District has projects under way or set to go pending grants from the federal government on both the north and south ends of the county, east and west, too.

“We have several big projects we’re working on,” said Don Carona, general manager of the OCDD. “We’ve been doing massive work on the Terry Gully project south of I-10.”

“That project is making a difference right now, and it will continue to improve.”

The Terry Gully project has been ongoing for nearly a year and has resulted in a vastly deeper and wider channel for storm waters to flow south.

Digging will commence soon north of I-10 to enlarge the ditch that runs behind the Maplecrest Baptist Church, site of some of the worst flooding from Imelda.

Northwest Orange County, north of I-10, was hit hard by Harvey. The Drainage District is working on projects that drain into Tiger Creek and Cole Creek.

The area that runs down the center of Orange County not only drains Cow Bayou and Adams Bayou, but those waterways, in turn, catch much of the runoff from Jasper and Newton Counties to the north, Carona says.

That’s why his agency is teaming up with the Sabine River Authority on a grant request to extend a relief ditch running from north of Adams Bayou across to the Sabine River.

The relief ditch already diverts water from up north to the Sabine River,” Carona said. “If not for that ditch, there would be some areas of Orange County that wouldn’t be habitable.

“We’re seeking to extend the ditch under Highway 62 to the Cow Bayou watershed. We get a tremendous amount of water from Jasper and Newton Counties. All of their water comes to us.” 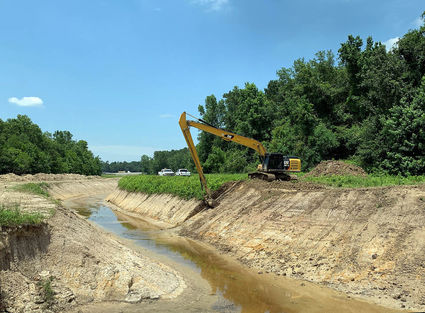 Other projects in the works involve reconnecting south county drainage to the Bessie Heights Marsh, which would flow into Sabine Lake.

The project seeks to work around a recent one by the U.S. Corps of Engineers and the Texas Parks & Wildlife which added 1.6 million cubic yards of silt in a marsh restoration. It left the outfall ditches not reaching their intended destination.

And, for an entity that is already responsible for more than 600 miles of ditch upkeep, a ton of paperwork.

“We’ve got engineers working on the design of the [SRA relief ditch] project and we’re working on grant requests to the Texas Water Development Board and to the federal government for CDBG-Mitigation funds.

“We’ve always got about four projects going on at once.”