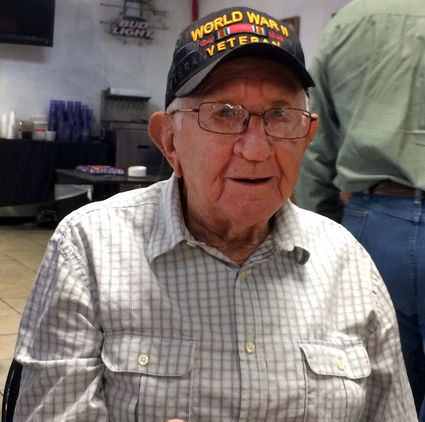 I got a call from Neighbor Cox, my friend of 25 years, who I spoke with nearly every day. My son Mark had introduced me to him 25 years ago, when we operated the newspaper from our BC office, The Creaux’s Nest, in “Neighbor Cox’s neighborhood. Back in those early years Doug Harrington operated the drug store; H.D. Pate had a law office; Dr. Mark Messer had a dental office and Bill Nickum, the insurance man, had an office on Texas Ave... Today Bill is the only one in the neighborhood.

Cox and wife Jenny kept us supplied with fresh vegetables and Cox kept Nickum’s yard mowed. Those were great times in Cox’s Neighborhood. Almost daily he and I sat at the big spool table, under the Hackberry tree. Over the years our relationship grew. I watched after him while Jenny was in the nursing home. For over three years he visited her once and often twice a day until she passed away a few months ago.

Back to that phone call from Cox. He told me he was in Lufkin with his daughter Karen and husband Keith Duplechin. He said they thought it would be best, during the virus, for him to be there rather than going in and out of stores, etc. I agreed, for now that was probably a good idea. An unexpected tragedy happened while Cox was in Lufkin. His daughter-in-law Diana, son Rodney’s wife, passed away from heart issues.

We spoke daily. He missed Jenny so much and felt if he was home it would help with his sadness. They had been married 71 years, both natives of Joaquin, in East Texas. They married when he returned from the war. Through the war he had corresponded with her older sister but when he got home he fell in love with Jenny. His brother married the older sister in a double wedding ceremony.

During his military career in the Army he was a shooting instructor. He rose to the rank of sergeant. Cox said most marksman instructors were southern country boys who learned to shoot hunting game. Since age 8, during those early years in Joaquin, he carried a shotgun and hunted.

When he was around 10 years old, he and his older brother were in the woods hunting and just roaming around when they heard a car pulling off the main dirt road. They stayed hidden and could hear a man and lady talking. The man put a shotgun on a tree stump and sawed the stock off and threw it in the hollowed out tree stump. The boys took it home to their dad. The next day, May 23, 1934, they heard about Bonnie and Clyde being killed nearby, in Louisiana. His dad had that stock mounted and kept it for years until the house burned down several years ago. Cox was sure it was the two gangsters.

Cox never boosted, but was proud to have been a heavy equipment and crane operator at Texaco, where he retired from. He and his brother Jerry once told me that people talked about Cox being the best that ever was at Texaco, all those years without accident.

One of Cox’s real blessings was that Karen and Keith’s three boys were raised across the street in a home built on property he had bought. He was proud of those boys, Kevin and Kody were tennis stars. Neighbor Cox played the guitar and all of them picked. The youngest boy Kegan’s talent amazed him.

Over the years, we kidded Cox about doing an Indian rain dance when the neighborhood was in a drought, since he was from Indian country. That will lead to the rest of the story.

Even though Karen didn’t want him to come home, thinking he would not get the care he needed, she finally consented. He called me and said he had spent the night at home, slept in his own bed and was enjoying his back porch. He had been home one full day when he decided to blow off his driveway. It was nearly dark, on a dead end street. He stumbled, broke his glasses, bruised his face but that wasn’t the worst of it, he couldn’t get up. Fortunately a neighbor happened to go outside and discovered him and called 9-11. He had broken two vertebras in his neck. After a stay in hospital and being fitted with a brace, he was moved to a nursing home for rehab.

Each week he read every word in the Penny Record so we mailed it to him. One paper had his picture with all the old veterans in it. He called me last Wednesday and was feeling pretty good. We joked and kidded a lot. I asked him if he was doing an Indian Rain Dance when he fell. He was sure he would be going home soon and I said I’d check with him in the morning.

Thursday morning June 4, about 6:30 a.m. the phone rang. He sometimes called as early as 5:30 a.m. It was his daughter Karen. The old soldier, Millard “Billy” Cox, 95, had just passed away. I was in shock. He had gotten sick during the night and was transferred to the Medical Center where he died in early morning. I have never known a finer man, one who spread nothing but good. Most WWII veterans average about nine years older than me. As a youngster, I was always impressed by any military personal in uniform. They were my heroes. Now many are dying along due to the virus. Neighbor Cox and I had a special bonding. He thought I hung the moon and I’m sure he did.

His funeral service was held on D-Day, June 6. He had talked about Gen. Eisenhower landing on the beach in Normandy in 1944. Cox would go on to serve until 1946. Another from the Greatest Generation done gone. In just a few years they will all be gone.

I’m proud to have known so many of them. The ache I feel in my heart today won’t soon go away. I’ll long remember my friend, a kind and decent man. He’s home now with his Jenny. Please see obituary.