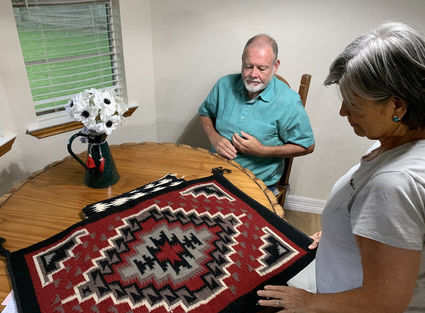 The retirement LaVern and Ricky Sterling had planned for didn’t happen.

God had a better plan.

For the past 16 years, the North Orange couple has spent about half of every year living and working as Christian missionaries on the Navajo Nation Reservation in the northeast tip of New Mexico.

“When I retired I intended to play golf or go fishing every day,” Ricky said. “But I sold the boat and I only play golf about once every two years.”

“We sold the beach cabin,” LaVern says as if she’s still surprised it happened.

The Navajo U.S. Indian Reservation – known locally as the Rez -- has a population (175,000) slightly less than the Dallas suburb of Frisco, Texas spread across an area the size of the state of West Virginia. It lies mostly in Arizona but extends to New Mexico and Utah.

“We’ve been out there 16 years,” she said. “We’ve watched a lot of kids grow up out there.” “It’s kind of like family out there,” Ricky said.

Ricky Sterling, 69, and LaVern, 70, have been married 42 years. They both worked for DuPont and both retired early so they could spend more time ministering – spiritually and physically – for the Many Waters Mission, located just outside the Reservation in Waterflow, New Mexico.

The Sterlings were members of North Orange Baptist Church for 33 years before moving to the Cowboy Church in recent years. But LaVern’s interest in missionaries went farther back.

“When I was 12, some missionaries from Africa came and talked to us at church camp,” she said. “I knew then that I wanted to be a missionary, but I didn’t know it would be after I retired.”

The Sterlings made the decision to retire early after LaVern visited the Rez for the first time, without Ricky, on a church missionary trip.

Among the many things she experienced was a first-hand visit with some of the Navajo Code Talkers, who had used their language as a U.S. secret code during World War II.

“On my first trip, some of us were asked to give Bibles to members of the Navajo Code Talkers when they were given their Presidential Medals of Honor,” she said, remembering Sen. John McCain at the ceremony at Window Rock, Arizona.

“We go back and forth now,” Ricky Sterling said.

LaVern: “We have churches we help in all three states.”

LaVern Sterling said she had accompanied many summer youth missions from North Orange Baptist Church on trips all over the country, mostly to help the poor.

“A friend said, ‘Let’s go on an adult mission,’ so we did,” LaVern said. “That’s when I met Lynn Cartwright.”

Lynn Cartwright and her husband Don run the mission year-round, though Ricky Sterling mentions that the area is often covered by ice and snow from the fall until the spring.

“We’re normally there from April through September,” Ricky said, “but right now they’ve got a Covid outbreak up there that’s bigger than New York [per capita], so we really don’t know what to do, or what we’ll do when we get there.”

Besides passing out Bibles and offering roadside ministry, the Sterlings spend a good bit of their time rounding up and distributing food and supplies.

“We have Bibles, food and clothing,” LaVern said. “Our sign says, ‘Free Prayer’ because they get charged for prayers sometimes.”

Many Waters Mission serves 33 churches in poor communities. With volunteer help, it has overseen the construction of nine more churches.

“Thirty-five percent of the people on the Rez don’t have running water,” LaVern said. “A few of the churches run on generators because they don’t have electricity.”

Last year, they rounded up and handed out about 25 tons of food. Most came from food bank in Farmington, N.M.

“Every week, we had to distribute it.”

They got to use a new warehouse.

The supplies were donated. The work was all volunteer.

“Ricky and I did all the rebar for the foundation,” LaVern Sterling said.

“Then we had 40 volunteers come from Arkansas and they built that warehouse in a week,” Ricky said.

After the foundation was poured, three cement companies sent crews to do the finish work.

“We have a dorm at the mission that sleeps 70,” Ricky said, his wife finishing the sentence, “and we fill it up” with volunteers.

“We schedule our mission team trips for a week.”

LaVern Sterling says she has been adopted by three Navajo families during her time on the Rez.

“We’ve had very, very good friends who are Navajo,” she said.

But the Sterlings don’t forget their Orange friends.

“The Orange area has been really helpful out there,” LaVern said. “We needed a dining hall and Pam and Rusty Honeycutt and others from the Cowboy Church came and built it. People from North Orange Baptist built one of the churches.

“Orange people have come out and helped out all over the Reservation.”

Rusty and LaVern regularly host their five grandchildren for a month each summer. 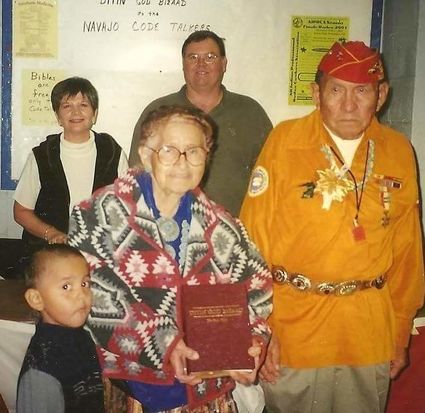 And also becoming an annual thing is a Navajo “Ladies’ Retreat” run with the help of women from Cowboy Church.

“It’s all fun, food, prizes, popcorn and movies,” LaVern said. “We’re having our fourth one this year, and now we can have it in the best Fellowship Hall on the Rez.”

They departed Wednesday morning for Year 17.

“People ask, ‘Why do you keep going back there?’” LaVern said.

“Ricky and I used to take vacations to Cancun, the Bahamas, Jamaica. We had a boat and a beach house.

“But it doesn’t even compare to out there [on the Rez]. God, He can do the impossible – and I’ve seen him do it.”