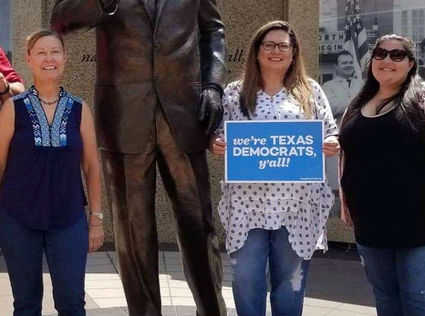 After Houston native George Floyd died May 25 with a Minneapolis policeman kneeling on his neck, a lot of people had to wonder if their local law enforcers employed similar "use of force" techniques.

A group of Orange women took it upon themselves to find out from Orange Police Chief Lane Martin and Orange County Sheriff Keith Merritt.

The women liked what they heard.

Both Martin and Merritt said no.

"Sheriff Merritt said they do not train on the neck restraint used in the murder of George Floyd, nothing near the neck or head. They don't use chokeholds," said Marsi Patronella-Ackerman, who spoke to the sheriff over the phone.

Patronella-Ackerman and friends Kelli Patin and Deborah Bednar are staunch Democrats living in one of Texas' reddest pro-Republican counties; each is a precinct chairman for the county Democratic Party.

And they're no strangers to Orange civic leaders.

"We call ourselves 'The Crazy Liberal Ladies of Orange,'" Patronella-Ackerman said. "We're just a group of three women activists who bug the hell out of our government officials."

For the recent assignment, they were joined by Patin's friend, Jessica McCord.

Bednar and Patronella-Ackerman arranged a meeting with Martin while Patin and McCord met with Merritt. Each discussion last about an hour, according to the women.

The women admitted to being very pleased – and a little surprised – how welcoming the chief and sheriff were.

"We called Sheriff Merritt and he was very open to speak to us. We made an appointment the next day," Patin said, "and talked about some of our concerns.

"It was an eye-opening meeting. It wasn't confrontational at all.

"You never know, being a left-leaning activist, how they'll take you. He [Merritt] was great.

Merritt announced his retirement, effective at the end of June. Lane Mooney, the sheriff elect, will be sworn in five months early at midnight, July 1.

Martin, who as police chief, is hired, not elected, to his job, impressed Bednar.

"We talked about the restraint training that Orange officers get. He [Martin] was pretty upfront with us," Bednar said.

"I thought it turned out pretty well."

"As far as the Orange Police Department goes, any time we've needed anything, they've been agreeable," she said. "Though I always think there's room to improve on everything. I'd like to see some more detailed training on how to handle protest marches."

Patin said the day she and McCord spoke to Merritt was June 5, one day before a planned peace march and demonstration in Vidor that drew 100 marchers and a dozen armed counter-demonstrators.

"He [Merritt] actually got a call about it when we were there in his office from [Vidor Police] Chief Carroll, and Sheriff Merritt talked to us about it," Patin said. "He had a plan for it. He had it written out."

June 6 was a tense but peaceful afternoon in Vidor and Merritt earned much praise for his leadership there at Commissioners Court June 9.

"He got out the procedure manual and read directly from it," Patin recalled the visit with Merritt. "He told us they had a seven-step "use of force" continuum.

"The first step was to try to talk the person down. The last step in the continuum is "deadly force."

The women say the major change they'd like locally out of the push for policing reform after Floyd's death is the establishment of a citizen's advisory board.

"We've been trying to broach this idea with people of a citizen's board, like they did up in New York and in Dallas," Patronella-Ackerman said.

"What we've seen lately shows it's important for the law enforcers and the community to know one another," she said.

"We want a community action committee. They do it in a lot bigger cities. Why can't we do it here?"