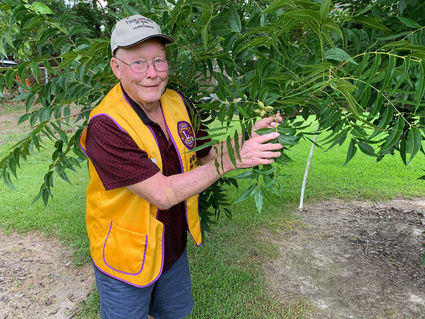 Ralph Thon of the Orange Lions Club shows off some of the green pecans growing on a pecan tree in his Bridge City backyard. Thon led a Lions project that donated and planted 180 pecan trees and 105 Satsuma plants at parks, churches and schools in East Orange County.

The Orange Lions Club is throwing some future shade and tasty treats around the eastern side of Orange County.

A tree-planting drive, led by club member Ralph Thon and drawing physical support from Orange and Bridge City Lions as well as Master Gardeners, and fiscal support from several area businesses, has been a first-year success.

The planting of 180 pecan trees and 105 Arctic Frost satsuma trees around county parks, churches and schools was completed under the direction of Thon, 75, and first-year retiree John Backer.

A Canadian native who retired from Orange Shipbuilding, Thon kicked off the project by donating $5,000.

"We put out a notice for whoever we could get to help and that worked out well," Thon said.

"Backer and I were out there every day, and Chris Kovatch [Orange Lions past president] was a lot of help, too. There were some other retired Lions during the week, too.

"The Orange Master Gardeners put as much labor in on our pecan trees as our [Lions Club] guys did. They were a tremendous help."

The Master Gardeners worked with Thon and agriculture agents from Texas and Louisiana to pick the best pecan trees. They ended up going to Texas Pecan Nursery near Tyler for those trees.

The satsumas, which are a type of mandarin oranges, were purchased from Becnel & Sons Citrus Nursery in Orange.

The Arctic Frost variety, which Thon said was patented by Becnel, was named a Texas Superstar plant by the Texas A&M AgriLife Research and Extension Center because it is so hardy in cold weather.

"This tree is hardy down to 10 degrees and will change the industry in the United States, because of its cold-hardiness," Thon said. "They claim that after three years in the ground, it'll never freeze."

The satsuma trees will grow fruit in their second or third years. 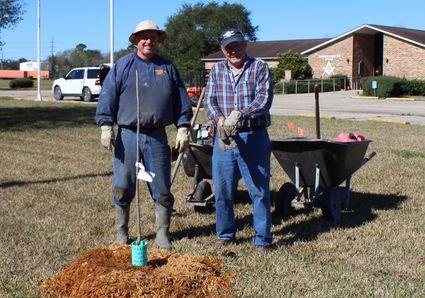 Orange Lions Club members John Backer, left, and Ralph Thon pose after planting the 180th and final pecan tree of their 2020 effort. Thon, who headed up the project with Backer, other Lions and members of the Master Gardeners, dedicated the final tree in front of the Masonic Lodge to the memory of departed friend Bob Clary, a Mason who founded Orange Shipbuilding in 1974.

"I've got one tree in my backyard that's 5 years old and it's making a bushel," Thon said.

The pecan trees, which can grow as tall as 60 feet high with a 40-foot umbrella, will start producing pecan crops after a half-dozen years.