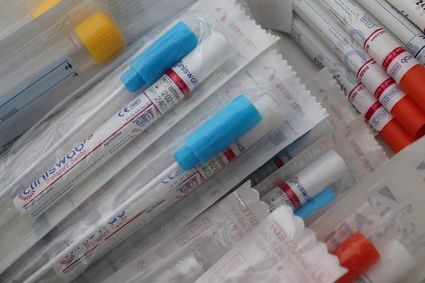 Whether you call it a second wave or prefer to refer to "hot spots," Southeast Texas is seeing the biggest rise in COVID-19 cases reported since early May, when Texas began reopening businesses shut down to slow the spread of the new coronavirus.

The last weekly numbers released on the Orange County Emergency Management website Friday, June 12 show an increase of 10 confirmed cases in the county – from 99 to 109 – from the previous report, issued on Wednesday, June 3.

The number of active cases in the county jumped from 3 to 14.

In the last week, both West Orange-Stark and Orangefield have suspended their summer athletic conditioning workouts because a player tested positive for COVID-19 or had been in contact with someone who tested positive.

Bridge City canceled its June 12 senior prom because "a large number of our students" have been exposed to those infected with the respiratory disease, said Tim Woolley, principal of Bridge City High School.

"We've been made aware of several confirmed cases of COVID-19 in our community," Woolley, wrote in a Facebook post June 11, "and a large number of our students who have been exposed with reason to believe some of them are exhibiting symptoms."

He said the cancellation was done "in an effort to ensure graduation occurs June 20."

Texas Gov. Greg Abbott took to the airwaves Monday to say that 20-something Texans are catching coronavirus in greater numbers and he called them out for taking COVID-19 too lightly and for not taking safety precautions, such as wearing masks when they go out.

A spokesman said the governor was acting on information from county judges and health departments around the state that said people in the 20-29 age group were having higher numbers of infections than in the past few months.

"We've had a little hot spot in the county," is how Orange County Judge John Gothia explained the local jump in the numbers. "It started with some of the young folks in that [20-29] age group, just normal stuff.

"It's not like it's a surprise with everybody out and about. It only takes one person to be infected and then you've got a lot of young people who are infected."

Younger people infected with COVID-19 tend to have milder symptoms or none at all. People with no symptoms – asymptomatic – can still spread the virus through close contact with others.

"Right now, 99 percent of the young people who get it will be fine," Gothia said. "The problem is they're getting it and spreading it to people who are not going to be fine.

"It's going to happen. The only way for it not to happen is for them not to go anywhere."

The numbers published, so far, do not reflect a significant increase in the number of confirmed COVID-19 cases among Orange County's 30-and-under residents.

According to the reports published by the county on its Emergency Management Facebook page, a total of 14 individuals in the 30-and-under range had tested positive for COVID as of May 1.

The latest report posted, June 12, shows 16 positives in the 30-and-under range, an increase of 2 cases in six weeks' time while the overall numbers have gone up with 32 confirmed cases since May 1.

Perhaps the numbers on the next county COVID report will show the type of increases among young people to which the governor and county judge referred.

In late March, Orange county joined Jefferson County and six other area counties to form a Southeast Texas Regional group to work together to obtain COVID testing and protection gear. The group issued a report five days a week, sometimes seven, but that group disbanded and issued its last group report May 20.

Since then, Orange County announced it would be issuing one report a week, on Thursdays. It has issued three reports since, on Thursday, May 28, Wednesday, June 3 and Friday, June 12.

Because most testing now is being done by private doctors and clinics, which, by law, only have to report positive tests, Gothia said no one is collecting the number of tests being conducted each week.

A total of 1,187 Orange County residents were reported tested, about 1.5 percent of the county population, when the regional group issued its last report May 20.

Beaumont statistics, published daily on that city's website Emergency Management page, have shown that those 30-and-under make up a steadily larger percentage of the city's confirmed cases, rising from 23 percent May 1 to 26 percent on June 15.

Statewide, members of the Dallas Cowboys and Houston Texans have reportedly tested positive for COVID, including Cowboys running back Ezekiel Elliott.

Bigger news, though, is the spike in new cases. The state topped 2,000 daily cases for the first time last week, then repeated it twice in three days with June 10 setting a one-day record of 2,500 new cases.

Texas has topped 89,000 confirmed cases since February, with nearly 2,000 deaths.

Jefferson County reported 95 new cases last week, its highest number since the pandemic began. Additionally, the county picked up 520 older confirmed cases because of a bookkeeping change by the state. All those cases were at the Gist, LeBlanc and Stiles state prisons and the total includes all positive tests for the year.

The order calls for citizens to wear face masks, practice social distancing and good hygiene, stay home if sick, avoid sick people, groups of 10 or more and all unnecessary travel.

Of course, mayors – or county judges -- have no power to enforce local rules currently as Gov. Abbott has suspended their authority to set disaster standards as he put forth his own rules for reopening the Texas economy.

"Somebody asked me, 'When will we get to 100 percent?'" Gothia, the Orange County Judge, said.