By Dave Rogers
For the record 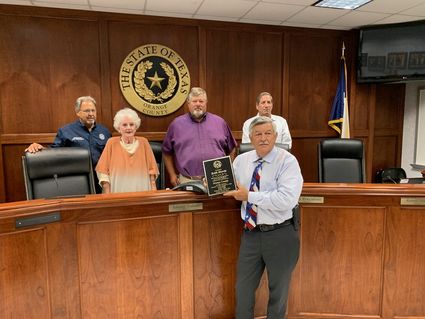 Then they gave him a bill.

The bill was for $407 as Merritt purchased his service weapon, a 40 caliber Glock, a customary procedure for retiring Sheriff's Office employees.

"The Sheriff has done a great job," Commissioner Theresa Beauchamp said as a plaque noting Merritt's 25 years of service to the county as deputy, constable, and, since 2009, Sheriff.

It was the last commissioners court meeting of Merritt's tenure, as his retirement begins July 1.

"We appreciate your service, your time and your kindness," Beauchamp said.

In the absence of County Judge John Gothia, who was ill, Judge Pro-Tem Johnny Trahan read Merritt's official letter of resignation before it was accepted early in a two-hour-plus meeting that included a 50-item agenda.

"There comes a time when you have to go," Merritt said, "and I've got to go."

Then he noted he and wife Marlene wouldn't be leaving Orange County for their golden years.

"I'm not going anywhere. Any time you need me, call."

After Merritt's resignation was final, commissioners met behind closed doors for only a couple minutes before reopening the meeting to vote 4-0 to have Sheriff-elect Lane Mooney serve the remaining six months of Merritt's third four-year term.

Next in the domino sequence was accepting Mooney's resignation as Precinct 4 Constable. Then another quick closed meeting before they announced Constable-elect Matt Ortego would take Mooney's job six months early.

Mooney and Ortego will be sworn in at midnight Tuesday night, which is also when Merritt's resignation takes effect.

"Because his term ends at 12 o'clock, they said they needed to do the swearing in at that time," Mooney said when asked about the unusual hour to show up for a new job.

The latter included $118,000 for a three-month payment to the Orange County Appraisal District and $81,550 for group health insurance for retired employees over 65 for July 2020.

Pennee Schmitt, county auditor, announced line item transfers of $1.8 million from one county account to another to cover needs through the end of the fiscal 2020 year, Sept. 30.

An example of one such transfer was from Sheriff Office salaries to Sheriff Office overtime, since the 136-member department has 20 openings and has been authorizing lots of overtime to compensate.

Schmitt also set up a special budget for a $356,000 federal CARES Act grant for transportation the county received.

The county agreed to a third-year contract with Weaver and Tidwell to provide auditing services with a note to start early next year seeking a cheaper vendor.

The commissioners approved a five-year agreement to spend $130,000 per year to move the county's financial software the cloud.

Lisa Reeves, management information systems director, said the change would be better than the current situation of spending $100,000 per year to maintain its own servers, and the change was also needed to keep data safer.

Clark Slacum, county engineer, reported the Road and Bridge department had taken receipt of a $376,000 Gradall excavator and a mini-excavator paid for by federal coastal protection funds.

He added that his department was making good progress on road repair, having finished 4.2 miles of the 19 miles of road on its 2020 wish list before being slowed by recent rain.