Mooney 'ready to roll' as Sheriff 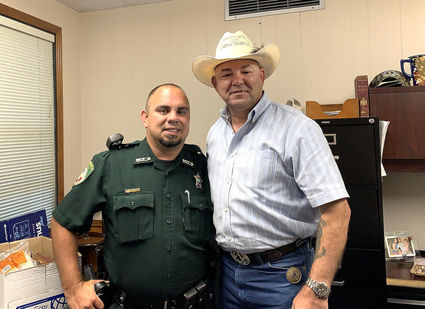 As such, he promises to go right to work for the taxpayers after he takes his oath of office at midnight as Tuesday, June 30 turns into Wednesday, July 1.

"We have to swear in everybody that's on shift that night," he said referring to Sheriff's Office employees – the deputies and corrections officers – all of whom serve at the pleasure of the Sheriff and have to be re-sworn every four years.

So then it's time to celebrate?

"After that, we'll go to the house, because at 6 o'clock in the morning I have to be back at the Sheriff's Office to swear in the oncoming shift for the jail and the patrol division."

Mooney, 55, and a native of Vidor, defeated a fellow longtime lawman, Rob Strause, in a tight Republican Primary race in March. More than 13,000 votes were cast county-wide and Mooney garnered 52 percent of the vote to 48 percent for Strause.

"It was kind of touch and go," Mooney remembered. "I felt like we would win, but I expected it would be close."

With no Democrats filing for the Sheriff's Office, Mooney faces no opponent in November's general election. He's been Sheriff-In-Waiting ever since, with Keith Merritt's third four-year term as top lawman not due to expire until Dec. 31.

But Merritt announced earlier this month he was resigning at the end of the month, in part, because he was confident Mooney was ready to take over.

So Mooney, who resigned Tuesday as Constable for Precinct 4, has reached his dream job since he started at the Lamar Police Academy in the late 80s.

"Since I started in law enforcement in 1988 and one of my long-term goals was to be a constable and eventually sheriff," he said.

Mooney is expected to bring a lot of new faces with to the Sheriff's Office with him, beginning with his new chief deputy, Keith Reneau.

Reneau had been with the Pinehurst Police Department.

There is typically a fair amount of turnover when a new Sheriff takes over, and, according to a source in the know at the Sheriff's Office, Mooney notified 14 current employees that he did not plan to retain their services.

But on top of that, Merritt said on the day he resigned that 19 of his employees had left since Jan. 1 of this year.

Nine deputies with a total of nearly 250 combined years of service took their county retirement between Jan. 2 and June 12, including his chief deputy, John Tarver and two division heads.

The latest to retire, on June 12, was Mooney's opponent in the March primary, Strause. He has gone to work for the West Orange Police Department, he said.

"I'm bringing in some of my own people," the soon-to-be Sheriff said. "I'm surrounding myself with good loyal people. They all have their areas of expertise."

"I want to bring back the reserve division," he said. "That will give us extra manpower if we need it."

Reserve deputies are unpaid volunteers, but perform most of the same duties as regular sheriff's deputies.

"Before I became constable four years ago, they were short-staffed at the Sheriff's Office and they've remained that way."

Both Mooney and Ortego were officially voted into office early by the Orange County Commissioners Court Tuesday, but it's not official until July 1's swearing-in.

After the Lamar Police Academy, Mooney worked as an unpaid reserve officer for the City of Vidor before spending about 14 years as a Vidor Policeman.

He worked 12 years as an Orange County Sheriff's deputy, working his way up from patrol to be assistant leader of the county's SWAT Team. He has worked for the state narcotics task force and has been handler for three different drug dogs.

He's also a non-commissioned officer in the Texas State Guard.